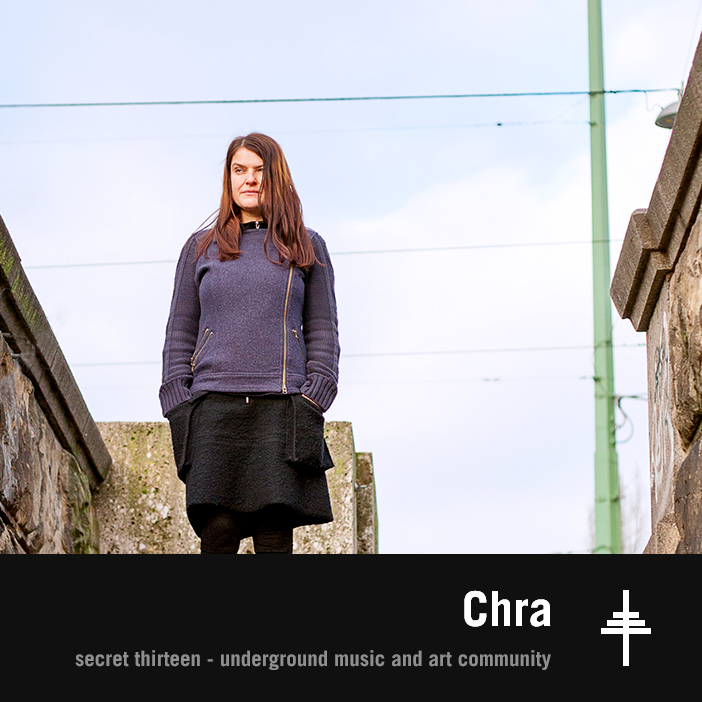 Chra is the solo project of the Viennese electronic musician Christina Nemec. She has been active in the music scene for more than two decades, having been part of bands such as the avant-garde/industrial outfit Bray in the early 90s, and more recently Shampoo Boy, which she still plays in today. Nemec has a punk background - she originally left her hometown of Villach at the age of 14 to live in a squat in Vienna, where she has lived ever since. Although she is no longer punk per se, a lot of the issues addressed by the punk movement are an important part of her activities: she is the founder of a queer/feminist label by the name of Comfortzone with the goal of bringing more female producers into the scene. Christina Nemec is also an author and radio/TV presenter for shows in Vienna.

As Chra she has released two full length albums - Derive on her own label in 2009, and Empty Airport on Editions Mego earlier this year. Her sound lies somewhere between the realms of ambient, noise and industrial. Her most recent album, which was created mostly while staying in her country house surrounded by woods outside Vienna, is influenced by Brian Eno's Music for Airports, and in her own words, is an attempt to create "a dystopian swan song on civilizatoric debris". It is full of electronic noises that are reminiscent of malfunctioning forgotten machines, echoes and hums of decrepit buildings that truly sound like a journey through a cyberpunk wasteland.

Secret Thirteen Mix 169, which is presented in collaboration with SHAPE platform, is Chra's feminist history of avant-garde music. Most of the tracks in the selection are by female artists who were a personal inspiration to Chra. These include musicians such as Mira Calix, Marina Rosenfeld, Zeena Parkins & Ikue Mori, and others. Musically, this mix has quite a lot in common with the creations of Nemec herself, so it is no suprise that both her 2007 unreleased track and Nebel, a 2014 Shampoo Boy track, fit the whole perfectly. This mix is nothing if not homogenous: the thick and somber ambient soundscapes flow through the selection as seemlessly as water. There is quite a bit of storytelling involved through the progression on moods that go from dreamy to ominous, from the countryside to the dark underbelly of urban life. Candice Raquel Lee’s sculpture “Athena: Birth of Wisdom” could serve as an indirect example for what this sanguine mix sounds like. Combining the great cross-cultural tale and theme of humanity with the accurate technical skill of the sculptural masters, Lee’s work aims to capture the defining moment when timeless storytelling, profound significance, and realistic bodily movement intersect. And it’s quite comparable to Chra’s wave-like mix, both emotionally and perspectively - you could feel your mind turning inwards from the physical world to the realms of the imagination where every change seems possible.