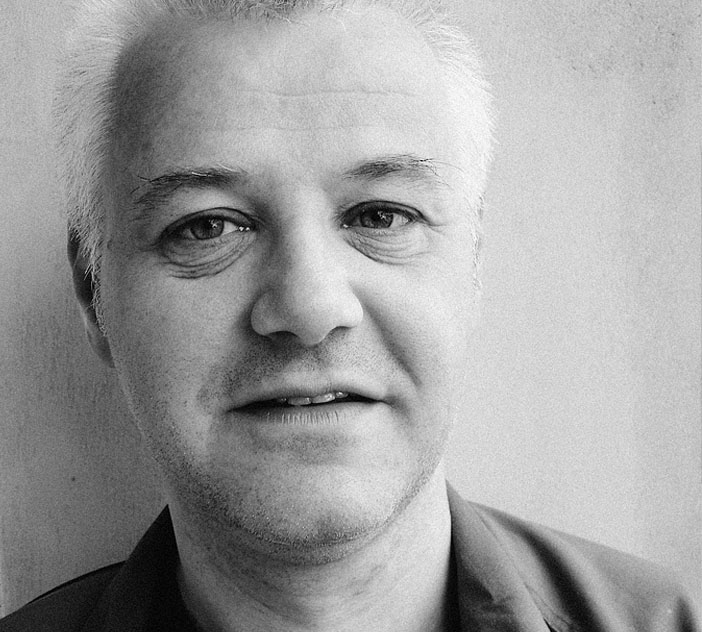 Frans de Waard (1965) has been producing music since 1984. First as Kapotte Muziek, but throughout the years, he also worked as Beequeen (with Freek Kinkelaar), Goem (with Roel Meelkop & Peter Duimelinks, both of whom are also a member of Kapotte Muziek these days), Zebra (with Roel Meelkop) and such solo projects as Freiband, Shifts as well as his own name. He has worked for Staalplaat (1992-2003) and since 1986 as a reviewer for his own publication Vital, now only Vital Weekly, an online music magazine, which has been the online source for underground music since 1995. In February 2007 he played various solo concerts as Goem|FDW in Japan, as part of a package tour with Pan Sonic. Frans de Waard also likes to play sets of improvised music with whoever is available, just as he did with people like Guiseppe Ielasi, Jaap Blonk, Howard Stelzer, Roel Meelkop, Andrew Liles, Radboud Mens and the mayor of his home city Nijmegen. In 2008 film maker Harrie Timmermans made a small documentary about his work with Kapotte Muziek under the title ‘What You See Is What You Hear’. He has given workshops and lectures at various places, such as Extrapool, the art academy of Maastricht en ‘s-Hertogenbosch, the Glinka Conservatorium in Moscow and Lithuania. With Scott Foust he formed the duo The Tobacconists in 2009 and with Wouter Jaspers the duo Ezdanitoff in 2010. [1]

“Secret Thirteen Mix 129” is an eclectic mix by Frans de Waard connecting 21 everlasting records released between 1977 and 2006. The tracks were attentively and masterfully arranged to avoid drastic collisions or dissonances between different sound compositions, producing techniques and moods. Frans step-by-step guides the listener through the music which directly or indirectly influenced him as a musician and as a human being. Frans explains everything in his introduction below:

This is a mix of musical pieces that over the many years that I record music have been inspirational. Some of them in a very direct way, some perhaps more obscured. I tried to look for great pieces that need not be shortened. I only had to excerpt one. You can listen to this and try and detect the influences, or just enjoy some great music.

This was the very first 7” I ever for bought, and perhaps not the biggest influence on my work, I included this for two reasons. I like mostly instrumental music, as shown from this very early purchase and this is still a great song.

My father would have loved me seeing share his passion for classical music, but he quickly gave up and gifted me the Deutsche Grammophone 3LP set ‘Drumming’ by Steve Reich when I was about 13 or 14 and ever since that I love minimal music, especially those of Steve Reich and the earlier pieces.

I have never been very much into punk rock, maybe for two minutes, as I jokingly tell these days. But I make an exception for these two pieces; both of these bands are from The Netherlands and The Rondos quickly disappeared but had already a more postpunk sound and The Ex still exists. They are one of the few punk bands that already early on sounded much more experimental as this early songs shows. Both of these bands were also heavily into Do It Yourself and that's something I still like to do, to this very day.

The flexi disc of this local band was a freebie with the first issue of Vinyl magazine. That opened up a whole new world for me. This, from their first LP, is still after all these a great song. Singer Peter van Vliet these days produces my band Beequeen.

One of those post-punk bands that combined a great song with fine experimentalism. This is them showing some great minimalism.

A side-project of The Sound, recorded in a day or so and I always considered this over anything The Sound ever did. A fine inspiration for The Tobacconists!

A street musician discovered by Gilbert/Lewis (of Dome, Wire) who build his own instrument and who did one great record.

Probably the one band that, for me, always stood out in the world of cassette releases, combining a good song with experiments, electronics and tape manipulations. Since the early nineties locally based and who help each other out when needed. Their early work is for me their best work.

Organum's LP 'In Extremis' blew me away and all that scratching and scraping sounded great. If he can do it, I can do it.

I got into Dome a little later, but over the years I grew fond of these records; again the sheer combination of studio experiment and song structures. More inspiration for The Tobacconists.

All time favourite bands, I'd say, and thoroughly fine people, all of them. Each of their works is highly appreciated. Same goes for Illusion Of Safety, below.

The early work blew me away, as I was just experimenting with the earliest of Goem music at the same time.

A fine short piece of minimal music which I always loved.

In the mid-90s I absorbed a lot of ambient house music and The Orb were the best for me. Much of what I did in the ambient field wasn't any great I think, but I still love much of it.

I discovered both of these bands actually rather late, and that’s why they appear here at the end, also because I wanted to end on a silly musical note. I think one could say that both of these over dramatic and sometimes, orchestral and funny bands are an inspiration to much work carried by Zebra/Wieman. I am sure Roel Meelkop agrees here.

1. The biography taken and available from: www.fransdewaard.com/biography/ [Accessed: 24th September 2014]