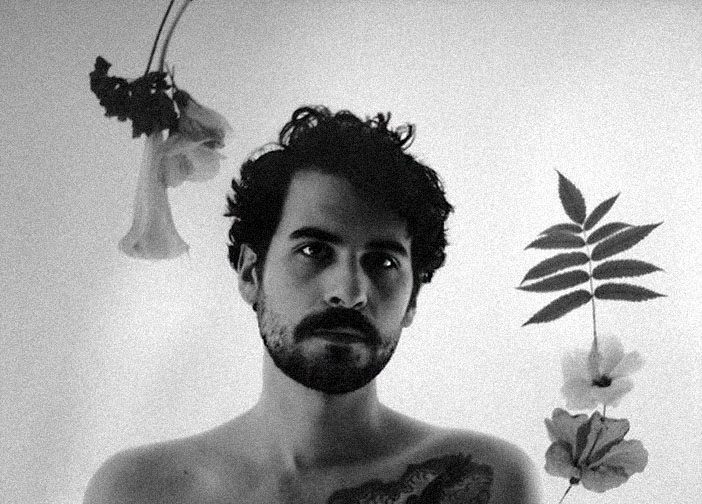 The author of the mix is Joseph Sannicandro (b. 1984), a writer, sound artist and scholar currently based in Minneapolis, where he is pursuing his PhD in Cultural Studies. His research interests include phenomenology, Hannah Arendt, Heidegger, Nietzsche, online education, new media, critical theories of technology, re-appropriation in art, copyright reform, Deleuze & Guattari, Radio Alice, Italian cultural history, and ecology. Moreover, Joseph is a co-founder of A Closer Listen community, where he publishes Sound Propositions, a series of essays and in-depth interviews with artists discussing their creative practices, deemphasizing gear fetishism. He has curated a number of compilations, including Con fuoco d'occhi un nostalgico lupo (2010, Lost Children) which showcased contemporary instrumental music from Italy. He also records under the moniker The New Objective and under his own name, most recently with pianist Stefan Christoff. The cassette Les Rumeurs de la montagne rouge, en chouer, convergent (2014, Howl Arts) utilized field-recordings from the 2012 Quebec student strike to explore the relationship between art and activism. He has previously contributed to The Silent Ballet, a web zine he co-founded in 2006, and SSG Music, as well as assorted other publications. He also co-runs the Lost Children netlabel.

“Secret Thirteen 139” is a picturesque and unique mix composed by Joseph Sannicandro. This mix is like a truly precious musical treasure every die-hard music lover could be searching for ages. In this over 1 hour long musical mosaic Joseph connects 55 pieces by his beloved and inspirational artists such as Tim Hecker, Vladislav Delay, Jon Hassell, Giuseppe Ielasi, Hue, Nicola Ratti, Machinefabriek, Klaus Schulze, MB, Steve Roden and many others, to form a complex, but at the same time a delightful soundscape. The opening and closing recordings by his The New Objective project tightly binds the overall mix’s concept and mood.

The mix radiates a strange musical luminosity, which guides the mind and the soul to the pure infinite satisfaction even when it is played in complete darkness. Divine ambiance, unexpected twists between music genres, fluid melodies and harmonious and thoughtful attitude to even the smallest details bring this mix to another dimension, a dimension where the nature meets man and his fundamental desire to perceive cosmos. As Joseph whispered, the mix could stand in parallel with Giuseppe Penone's metaphorical sculpture "The Hidden Life Within". And it’s quite a good example, because both, mix and sculpture, are based on the magical and fantastic groundwork, also the form, which could not be replicated.

In the beginning we asked Joseph to interpret the outer space theme with his mix through his own perspective, but in the end the recording expanded into a much deeper, more metaphysical exploration of the whole universe with all it’s phenomenons and wonders. Please, take a moment to read Joseph’s keen comment about the mix.

It seems to me that the association between electronic music and outer space has been over emphasized, and so this mix is an attempt to explore music that is oriented towards inner space instead. The core of the mix is built around four excerpts from Maurizio Bianchi and Matteo Uggeri's “Between the Elements” quadrilogy, which itself emphasizes the interstitial, the space between. So the focus here is not just a naïve call to "look inward" but to posit a rethinking of our ideas of space in general. The association between electronic music and space is about more than the use of synthesizers in sci-fi soundtracks; it's about mapping the promise of progress onto new technologies, in fact it's about perpetuating the myth of progress in general. In the post-war period, it made sense that new technologies would be identified with the promise (or threat) of the cosmos, but this metaphor is not innocent, nor is it something new. In "Western" philosophy, Thales is traditionally considered to be the "first" philosopher. He is remembered for being the first to suggest that all things share a common substance, which he hypothesized might be water, as well as his accuracy in predicting a solar eclipse. According to Plato, so enraptured with the stars was Thales that he would walk around with his gaze towards the night sky, and thus he fell down a well. The moral of the death of the Astrologer who Fell into a Well seems to me to be of particular benefit to us today: look where you are going. My writing in recent years (both music- and academic-) has been animated by a distrust of the fetishization of technology, and in contrast to the dominant liberal-utopian narrative by an acute awareness of the depoliticization engendered by new technologies. I'm no Luddite, but think we all must do more to think what we are doing. It's not as enough to simply talk about how we use technologies. We are encouraged not to think about what goes on in the device itself or in the design process, but it's here that decisions are made that effect masses of people who have no say. We are literally being legislated by our devices. And so I gravitate towards music that is not only an expression of an inward reflection, but that also seeks to misuse equipment, to find music hidden within sounds already present, to pursue the productive forces in the breakdown and the spaces between, the only places from which the new can truly emerge. My mixing style here is also intended to reflect that.