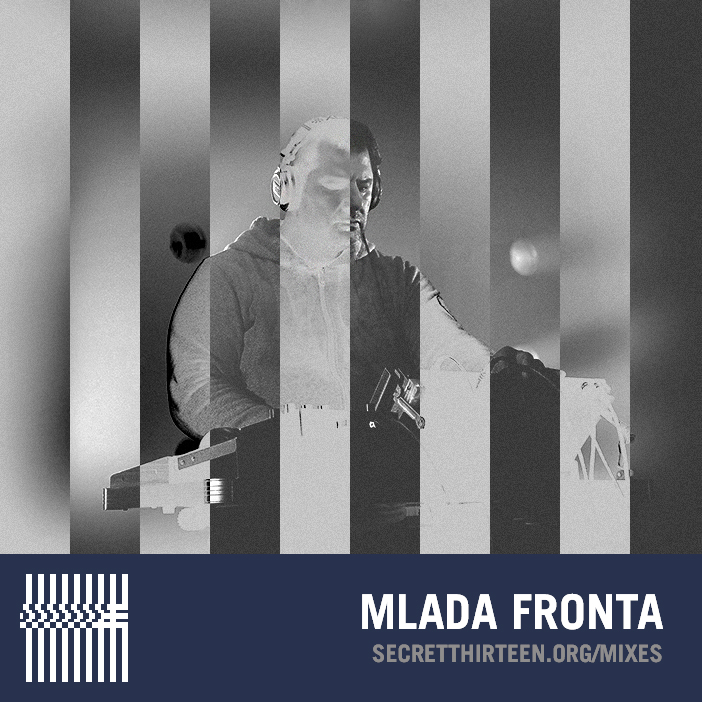 The author of the mix is Rémy Pelleschi (b. 1966), known as Mlada Fronta, a French electronic music artist living and working in Cannes. Pelleschi’s musical career began in the early 1990’s and since then he has released numerous records on such notable industrial/synthpop/IDM labels as Artoffact Records, M-Tronic, Ant-Zen’s Flatline Records, as well as on his own imprints. The media says that Pelleschi “brings a variety of sounds to industrial electronics. Described as ranging from a haunting complex atmospheric sometime genuinely eerie creation to original techno-ish power noise with hard hitting unusual drum beats, Mlada creates beats and ambience that are irresistible to dance to and beautiful to hear.” [1] This is an obvious truth. Mlada Fronta always explores new musical territories and is ready to present bizarre structures of diverse music with each new record. His latest album “Polygon” is a good example of the progress this artist made in the last couple of decades.

“Secret Thirteen Mix 148” is a mercurial mix which could sound a bit controversial at some levels for those who only seek trendy music online. However, it opens rich musical horizons for die-hard music explorers who are looking for unexpected, yet radical, but at the same time inspiring sound collisions. 32 timeless records released between 1974 and 2014 in more than 2 hour mix should guide you through electrified lands where almost forgotten electronic music gems float. Here tracks, balancing between more niche and mainstream electronic music scenes, create and radiate completely different concepts/moods after being smoothly and accurately fused all together into one continuous wholeness by Mlada Fronta’s broad-minded and long-time polished perception of sound. For example, well-known “Diesel Power” by The Prodigy mixed with 2nd Gen’s raw “And / Or” track or Deadmau5’s energetic “Take Care Of The Proper Paperwork” with the beautiful noir pop/italo piece “Under Your Spell” by Desire effectively form a refreshing and surprising view to what we have witnessed before or even what was rejected. However, a great patience is required for some parts of this mix, but it is totally rewarding. The salvation army consisting of such artists as Autechre, Pan Sonic, Speedy J, Orphx or The Soft Moon harmonizes this whole fragile musical groundwork.

The author resurrects a great palette of sentiments for the 1990s/2000s electronic music scene, where being a part of a specific genre was not that important like nowadays, because most of the bands and artists were creating their own sound with a strong identity feel, which did not need to be strongly categorized. Yes, some artists included in this mix later in their careers became a part of popular music scene by changing their sound or maybe just because labels pushed them to go mainstream, but this can’t hide the fact that they have influenced hundreds of artists around the world at their time with their astonishing and unique debut works. However, music industry transforms fast and often even well-praised and critically acclaimed records end up being forgotten. Mlada Fronta’s mix is a good starting point for some of them to be remembered again.

Knowing the fact that this is a first-ever online mix by Mlada Fronta, we quickly, yet spontaneously compared it to an early Adolf Fleischmann’s concrete art style painting “#99”, which indirectly reminds Mlada Fronta’s productive musical architecture and the variety of this selection.

Please read Mlada Fronta’s answers below to find out more about his musical perception:

In your mix there are some of tracks that could be easily related to the mainstream music scene (e.g. The Prodigy, Deadmau5, Digitalism etc.). Could you reveal why did you choose them for the mix? Moreover, how does these tracks influenced you as an individual and music creator?

I remember the first time I saw the The Prodigy’s “Smack My Bitch Up” video clip, it was in 1996. In the same period I saw the “Trainspotting” movie. For me both had the same vibe, same mood which I liked a lot. For a long-time “That Total Age” album by Nitzer Ebb was one of my main influence too regarding electronic music, but The Prodigy changed a lot of things… “The Fat of the Land” was fresh and catchy, with a punk attitude. I listened to it probably hundreds of times. The album has the great use of samples and loud beats, all with a funny view, far away from what I used to listen to from the industrial scene. The same situation was with the English band Underworld! In my view, their “Dubnobasswithmyheadman” album was a great revelation of electronic music with a forward-thinking approach to composing.

At this stage I’ve changed all my audio setup and my composing style! In my music I’ve always wanted to include sound with a lot of energy and at the same time with a human feeling. So using real-time audio samples, beat machines and analog synthesizers was an effective way to compose a new album like this. I have always had one very important rule while composing: do the most by playing it in real-time, by avoiding too much programming and so keeping a more natural feel in composition. This is how 3 years later I’ve released the “High Tension” album, my new musical vision, which perfectly reflected what I had in my mind.

Regarding the “Trainspotting” movie, the cinema remains one of my main influences when I compose and like “The Fat of the Land”, “Trainspotting” was a real electroshock! If you listen to all of my albums, there are always some references to cinema.

I really don’t care about mainstream, it’s only about what I can feel and I believe that’s the most important thing. No matter if it’s Deadmau5 or Digitalism… Mlada Fronta is a project with a lot of changes. It’s evolving since the beginning and finally this is why I wanted to compose such album as “Polygon” in 2014. This album perfectly reflects my mind and visions nowadays.

What does this whole mix, it’s concept mean to you? Please express your thoughts.

This mix reveals what kind of music has influenced me and my composing process and how it coloured my everyday life. Everything is linked. There isn’t only one kind of music that I appreciate, it’s more a question of vibes. No matter if it’s electronic, house, techno, industrial or even jazz, it’s only music for me and only what I could feel is the most important thing to me. It’s a natural instinct and I always use this approach when composing music.

For example, this is one of the reasons why I chose the track “Coltrane Sündïa” by Magma. Magma is a French band with an experimental touch in their music, it’s not jazz, it’s not rock, it’s not electronic music… It’s Magma delivering to us their musical universe. No copy/paste here, what you listen to is unique, very special… Moreover, all other tracks may have a long duration, because it should be like in trance/tribal/ritual music, where you need more time to getting into the music.

I like the progressiveness and repetitions in music a lot. That could be paradoxical and tricky, but with my mix I try to expose this duality. And therefore you can find it in my music too. This is why pop or modern music is so boring as it too heavily relies on obvious structure of composing and this constant wish of putting vocals (and simple lyrics) onto music.

I’ve chosen all the tracks which retrace all my influences since I started composing electronic music. I was quite lucky to see most of these bands live on stage and I will always highly appreciate those moments in my mind. Peace, Love And Pitbulls was a real musical bomb when I first time listened to them as well as “The Downward Spiral” album by Nine Inch Nails. I was at the NIN’s concert in Paris in 1994 (only 1 concert in France!), the concert blew my mind and strongly influenced my own future concerts… And Speedy J with its “Ni Go Snix” mix at Sonar festival. What a great souvenir - all the audience was so surprised by such an experimental mix! Same feeling with LFO (RIP Mark Bell) or Pan Sonic…