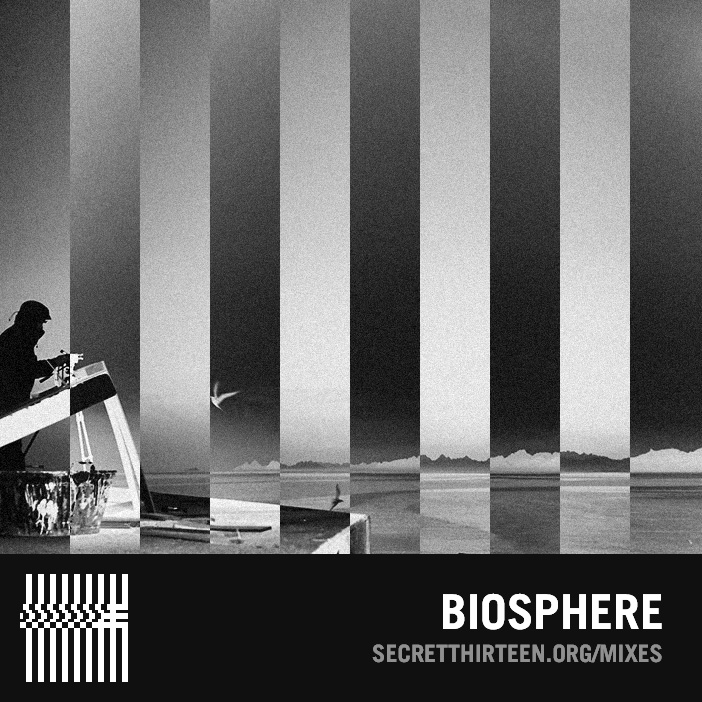 “Secret Thirteen Mix 054” is a conceptually selected, sentimental music compilation that gradually connects 16 original vinyl records by such influential musicians as Throbbing Gristle, Yellow Magic Orchestra, Bill Nelson, The Human League, Pyrolator and other unforgettable talents. In 1992 the author of this mix listened to the works of Pete Namlook (1960-2012) for the first time and it reminded him of some of the electronic music from around 1979-1981. This music was an inspiration for the author, so this is an attempt to create a similar atmosphere to the one in Namlook’s album.

The author of the mix - Biosphere - is Geir Jenssen (b. 1962), a Norwegian musician, sound recordist and active mountaineer who lives and works in Tromsø, 350 kilometres north of the Arctic Circle. In over two decades Jenssen has released a veritable catalogue of ambient electronic music on such labels as Touch, Origo Sound, Apollo and his own imprint, Biophon Records. Jenssen doesn't need an extended introduction - everyone has already heard (of) his works (“Substrata” or “Patashnik”) and likely follows his musical path.

“Secret Thirteen Mix 054” is a coherently touching musical selection that shrouds the listener in a pleasant sense of nostalgia. An ably balanced mystery and emotional tension uncover high-quality, long-lasting oeuvres of exceptional inventiveness not only within the bounds of ambient, but also within industrial, and experimental music in general. The waving atmospheres, memorable resilient melodies and pronounced carefully created rhythms born from the mastery of hardware and composition, form the basis of the selection. Compelling, melancholic creations confirm that the fundamental concept in this recording is the sublimity of nature and its fight around harmony, death and paradoxes. The development of the selection is smooth and calm, selected works are played almost in full length. It becomes exposition-like, so there is enough time for absorption of every track and space for interpretation. Suddenly varying electric piano chords and occasionally emerging old synthesizer entries are woven together with professional, widely ranging melodies. These melodies are submerged in a sustained kaleidoscopic skillfully modulated sound space. All the elements bring about a cinematographic feeling and a strange vitality to this selection. Progressively sweeping pad layers and emphatic, sometimes meditative instrumentation arrangements evolve into a dramatic, penetrating three dimensional texture which is carefully balancing between light and heavy musical tones. The final richness is extracted from subtly artificial acoustics, repetitive variable musical fragments and diverse rustles that are drowned in a minimalistic sonic tension and lower, slightly distorted audio patterns. Light crackles from old priceless vinyls provide a subtle roomy effect, adding warmth to the experience.

“Secret Thirteen Mix 054” is like Robert Motherwell's modernist painting “Personage, with Yellow Ochre and White” where intuitively saturated and striking brushstrokes create a complex allusion to existentialism through the artist's deliberately constructive expression. This is a rare and exclusive mix, a masterpiece that fully demonstrates the author's philosophy on sensitivity, inner peace, his refined musical knowledge and ideology, as well as a complete feeling of music.