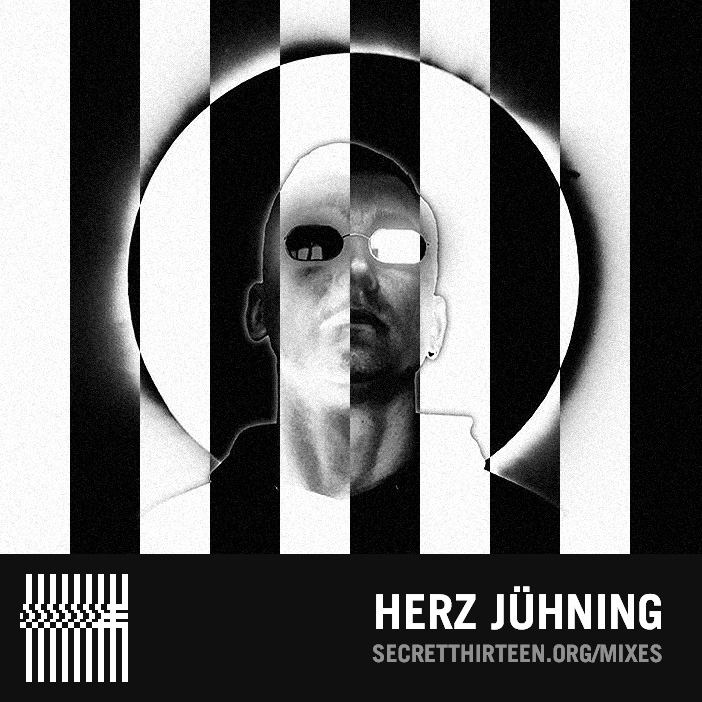 Herz Jühning is a project of German artist Kay Jühning, who started it by experimenting with harsh analog sounds after getting inspired by the rougher side of post punk/synth music. Born and raised in the GDR he saw these music styles as a form of resistance against the regime. His project quickly evolved into a separate artistic world, where underlying human fears, inner threats and persistent anxiety are soundtracked by sharp and raw synth pulsations going in union with noisy and atmospheric power electronics soundscapes. Kay’s music has an ever-present tension and mental angst that can truly make one feel uncomfortable. However, his sound also contains a synth-pop subtlety - likely a remnant of his early influences. It’s no wonder that all of his releases came out on Haus Arafna’s Galakthorrö label, which shares many similar sensibilities.

Secret Thirteen mix 157 is a chronological selection showcasing Kay’s musical development. It shifts between German post punk/NDW 80’s classics and outbursts of rough industrial/power electronics. Kay even went so far as to master old cassette songs to achieve a higher quality without deviating from his vision. The selection starts with the powerful uptempo punk of legendary Berlin outfit Idea, and proceeds with the timeless NDW bomb “Wütendes Glas” by Swiss minimal wavers Grauzone. Das Kabinette’s self-titled wave hit prepares the listener for darker waters, while a sophisticated composition by Einstürzende Neubauten and the abrasive aggression of Dive act as mediators between the different worlds that shaped Kay’s musical path. The mix continues with brittle analog noises from two fellow Galakthorrö artists, Haus Arafna and Subliminal. Marita Schreck’s raw experiments are followed by the monolith industrial of IRM. The selection concludes with several private unreleased tracks - one of the most interesting moments on the mix. Judyshed’s dark electrified post punk piece, and the synthetic vocal soundscapes of 15den are true hidden gems. The whole collection has features similar to Kay’s music in terms of maintaining dynamic tension, exploring dark emotional depths, and standing on the verge between crystal synth structures and concrete noise.

The mix might remind one of Antonio Palolo’s neo-expressionistic masterpiece “Untitled” or the abstract “Itinerario” by Giulio Turcato, which was made using action painting. Turcato’s artwork mingles figures and geometric elements using psychedelic retro-futuristic colors, much like the first part of the mix, while the colorful punkish playfulness of Palolo’s work is like the second part insomuch as it leads to atmospheric and dark undertones, creating a similar tension between statics and dynamics, color and diverse monochrome shades.

Kay Jühning on his recording

I was born and raised in the old GDR, before Germany was fused together. My parents heard this kind of music at this time. This would be my first contact with music I really liked.

This mixtape is chronologically compiled, so you can get an idea of my musical development. It starts with the punk and post-punk music of East Germany, with resistance against the dictatorial regime in every sentence. It was the yearning to do something forbidden and wrong, but we felt free and wild. The German language defines this genre.

I took a fancy to bands like Grauzone, and Kraftwerk too. The electrical, synthetic aspect of this kind of music attracted me a lot. After the fall of the Berlin Wall, a new kind of availability arose. Everywhere you could get electronic music, and my taste in music changed towards the harder kind of electro.

I never was a fan of the techno music at this time, albeit there were some special, unique songs. With the first "Underground Clubs" i came in contact with power electronics, harsh noise and industrial music - it was the fulfillment I was looking for.

I was so impressed by this kind of music, that I started to collect equipment and with the cheapest, and in some cases really low quality material, I began to make music. Constant work on myself and the equipment improved the quality of my music until today.