By Paulius Ilius on 26 May ’16 Mixes, Secret Thirteen Mix 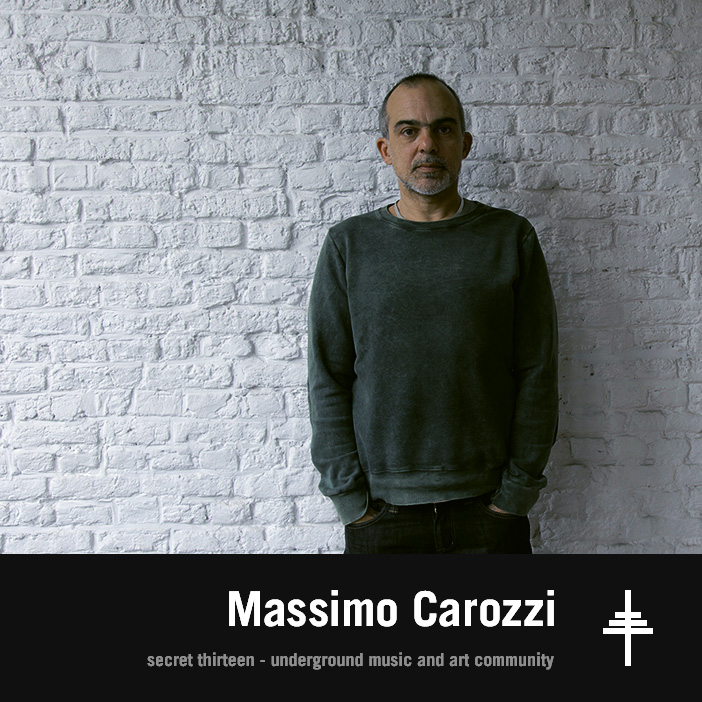 Massimo Carozzi is an Italian multidisciplinary artist experimenting in a wide range of forms ranging from photography to field recordings. Massimo is the founder of the ZimmerFrei collective, which employs various artistic media to investigate the relations between real and imaginary, public and private environments. In addition to this, Massimo also creates diverse experimental music under various guises and in different projects. The latter stretch across a wide range of stylistic areas from the minimal dub techno of Weight and Treble, which has an EP released on a Lithuanian label called Cold Tear Records, the improvisational environmental soundtracks of Phonorama or the audio-poetry project El Muniria and others. All of these ventures are distinct and each shows a new side to the artist.

Secret Thirteen mix 185 is the first of its kind within the context of our journal. This selection, called “Sillon Fermè” (“locked groove” in French), consists entirely of locked grooves taken from various vinyl records in Massimo’s collection and recorded live on two turntables, adding a third one for overdubs later on. It places the listener into a hypnotic and monotonous state, which subtly shifts as one groove fades into the other. They play among themselves, interfere with each other, and form a beautiful multilayered piece, which at times sounds as a single coherent composition, a unified flow of charming repetition. Radiophonic bleeps, woolen jazzy loops, psychedelic swings, melancholic ambient washes or concrete drones are just a few stylistic examples used in the mix. Massimo does not allow loops to outstay their welcome, but the transitions are always smooth and delicate. The moods are also many and range from playful coziness to haunting swirls or tiny surreal soundscapes - all a testament to the beauty of repetition. The sources are as colorful as everything else about this mix - Massimo’s locked-groove vinyl collection is extensive. We have such masters of sound-cycles as Janek Schaefer, Stefan Goldmann, also excellent series from the Staalplaat label and others. The selection’s flowing continuity and elegant circular drift are reminiscent of this untitled art work by Lothar Charoux.

The author on mix

“I began collecting locked-grooves records a long time ago. These objects are fascinating: they have a built-in "ostinato", persistently repeating itself; they are something between a piece of music and a musical instrument. Furthermore, vinyls (and the sounds their grooves contain) deteriorate over time with repeated use, creating unexpected changes in the grain of sound. Something interesting happens when you mix two locked grooves vinyls: usually those records have dozens, sometimes hundreds of locked grooves per side and it becomes nearly impossible to exactly locate the groove you are looking for. Therefore there is also an aleatory element to this mixing technique, which I find intriguing.

I recorded this mix directly into a two track recorder using two Technics 1200 turntables and later added a few overdubs using a Stanton T50 turntable. The mix is entitled “Sillon Fermé”, in reference to the first experiments done with these kinds of grooves by Pierre Schaeffer in 1948.”

The list of the records used in this mix