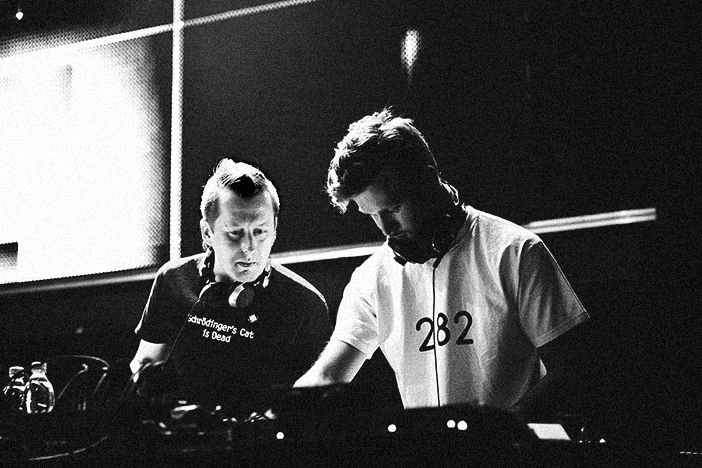 Before the start of Outline Festival 2015 in Moscow, Константин Мезер (Konstantin Mezer) & Иван Напреенко (Ivan Napreenko) of Sal Solaris were kind enough to answer a few questions about their musical background, influences, their views on society, and other related topics. This Russian duo has been active in the post-industrial field since the late 1990s, building cold, powerful and noisy ambient structures with phantom melodies and mesmeric rhythmic patterns.

Justinas Mikulskis: You go by the name of Sal Solaris, can you give us some insight into the name?

Konstantin Mezer & Ivan Napreenko: The name is taken from an article in the Limonka newspaper, issued by the National Bolshevik Party in 1997. According to the text it has alchemical origins and means a new “Self” free from the illusion of false consciousness.

In those days it wasn’t an eternal disgrace, or zashkvar, as we say in Russian, linked with the National Bolshevik Party. It was a multicolored union of passionate and sincere radical youth seeking to create a better society. Nowadays, sadly, is has nothing to do with opposing the regime.

We still like the name, it is strong, full of poetry, and related to the idea of (inner and outer) space conquest. We can also revise the idea of being free from consciousness from the modern neurobiology and, put more broadly, the congnitive science point of view.

JM: Did you have a happy childhood? What did you like to do when you were a child? Do you remember anything about your personality at the time? Do you think you were born an artist?

KM&IN: We certainly do not think of ourselves in natural-born ‘artist’ terms. It provokes poor associations with ‘free floating art’, ‘art for art’s sake’ etc. No process is free from its social conditions, including art. So we are just kids born in 1970-80’s, and we were traumatized by the shutdown of the USSR, as were many people of our generation (and our country). Yes, the empire was ugly, tired, and imperfect. But any hopes for a new, just and free society were crushed by the growing gap between common people and those who took power. And now that the Soviet Union has dissolved and the imperfections of empire are restored and emphasized, the great features of that project seem painfully obvious.

JM: When you started making your own music in the late 1990's, did you have any reference points? Say, for example, the dark ambient explorations of Lustmord or Thomas Köner’s interest in composing cinematic music for old silent films?

KM&IN: For Sal Solaris the starting point was, probably, Inade’s album ‘Aldebaran’. Now we get inspiration from a huge array of sources ranging from French black metal and minimal synth to dark techno and weird americana.

JM: You’ve been playing and recording for more than 15 years now. Do you see any difference between being in a band today (with Facebook, Bandcamp and illegal downloads) and back when the internet was still in its infancy?

KM&IN: Of course we are deeply thankful to Internet progress, especially illegal downloads. It is also great that so many people are involved in making music nowadays, because poetry is a thing for everyone to do. But there is a backside to it. Technology eliminates ‘distance’. thus eliminating closeness too. Information overflow is really hard to handle, things get lost in it.

JM: Is taking a risk part of creativity? Do you like to take risks?

KM&IN: Exposing oneself – in music also – is always risky, even in a state of information overflow. Probably one should remind theirselves that there are no right or wrong choices, only choices and their consequences.

JM: What about the electronic music scene of today makes you laugh? Why?

KM&IN: Well, transformation of the (now dead) industrial culture is rather ridiculous. While it started as something that questions all notions, it has become serious beyond criticism. Why so serious?

JM: On an "average day" is your main focus on results and tasks or people and emotions?

KM&IN: On an average day we try do overcome banal binary oppositions. Usually we fail. Hopefully some of our recordings succeed, for example the Eigengrau collaboration with Reutoff or our last EP ‘Tautology and Paradox’ released on our own brand new digital and cassette label NEN Records. Check the bandcamp!

JM: Do you think the processes of socialization within humanity have deteriorated due to the way our civilization developed? Do you think people are less capable of dealing with their emotions than they were in the past?

KM&IN: It sounds as if there was some kind of Golden Age of humanity when it had not deteriorated due to civilization… Implausible. Maybe it is better to think that humanity goes through the transformation of solidarity mechanisms which are closely linked to socialization in general. Integration in traditional societies is based on the homogeneity of individuals. Modern societies are integrated by the interdependence of individuals who are very different. So one could say that civilization gives voice to those who were once outcasts and outsiders. But the backside of this differentiation is the growing atomization of society and the emotional alienation of its members. We believe techno music is a great remedy to restore emotional bonds.

JM: What do you think is the relationship between drugs and music? How about violence and music?

KM&IN: There is a love relationship. In both cases, for sure.

JM: What would life be like without art? Could you even imagine such a thing?

KM&IN: We believe art and music are immanent to humans. We’d rather think what life would be without capitalism, fundamentalism, chauvinism. A beautiful thing.

JM: What are some of the books and movies that were a strong influence to you? Do you prefer fiction or non-fiction? Why?

KM&IN: Fiction and non-fiction are devices to understand reality, and they are deeply intertwined. Scientific articles use the same methods of persuasion as fiction stories. So we like both. Hard sci-fi, new weird, post-cyberpunk on the one hand. Evolutionary psychology, cognitive neuroscience, actor-network theory on the other hand.

JM: Do you believe otherworldly, extra-terrestrial beings exist? Do you think we will be able to establish some kind of contact anytime in the future or fail (as in most Stanislaw Lem novels)? What do you think that contact would lead to?

KM&IN: Taking into consideration the number of stars in our galaxy, galaxies in local group, local groups in clusters, clusters in superclusters, superclusters in filaments, and also we should not forget new findings in prebiotic chemistry and eternal inflation theory… Well, extra-terrestrial life exists. To establish the contact we need to find Physics beyond the Standard Model and make advances in Directed evolution to achieve radical biological transformation. Which kind of contact will it be? We hope for two scenarios: haunting (see ‘Blindsight’ by Peter Watts) and inspiring (see Iain M Banks ‘The Culture’).

JM: Any last words or thoughts for the readers?

KM&IN: Free happiness for everyone, and let no one leave offended.