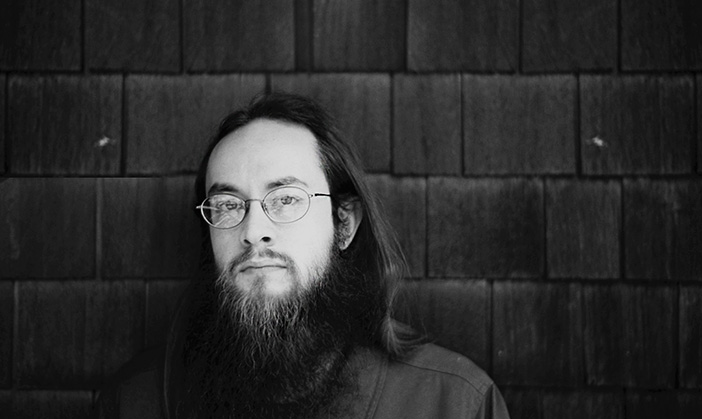 The author of the mix is Aaron Martin, an American professional multi-instrumentalist, sound artist who works and lives in Topeka, Kansas, United States. From the early days Aaron explored the sound of guitar, drums and other instruments when at the age 17 he started to study cello in a college. During his studies Aaron started to experiment and combine live instruments with electronic devices. His minimal, austere style of playing remains a hallmark of his sensitive sound which is formed of a spectrum of instrumentation and a looper pedal to take his pieces into a more kaleidoscopic realm. Since his first official album “Almond” on Preservation in 2006, Aaron has arranged and released a solid amount of records on such labels as Type, Experimedia, Under The Spire. Collaborations with notable musicians such as Machinefabriek, Part Timer, Justin Wright and Dag Rosenqvist (as From the Mouth of the Sun) granted Aaron a mobility and expanded sound variety.

“Secret Thirteen Mix 021” is a picturesque musical compilation formed of fifteen Aaron’s rare, gently soul stimulating compositions. Luckily the audience can hear some never released or published recordings from the in-studio and public performances from Aaron’s visit in Amsterdam taking part in Dwars Festival. Also there is a remarkable section from a composition “Straw” that was created for Aaron’s final college recital. Actually the whole selection sounds like a one continuous, skillfully prepared harmonic concert. Emotional and structural developing is quiet but with a strong impression which gradually creates authentic cinematic script. There is a friendly balance between the touch of organic instruments and understanding possibilities of delicate digital technologies in the perspective of academic music.