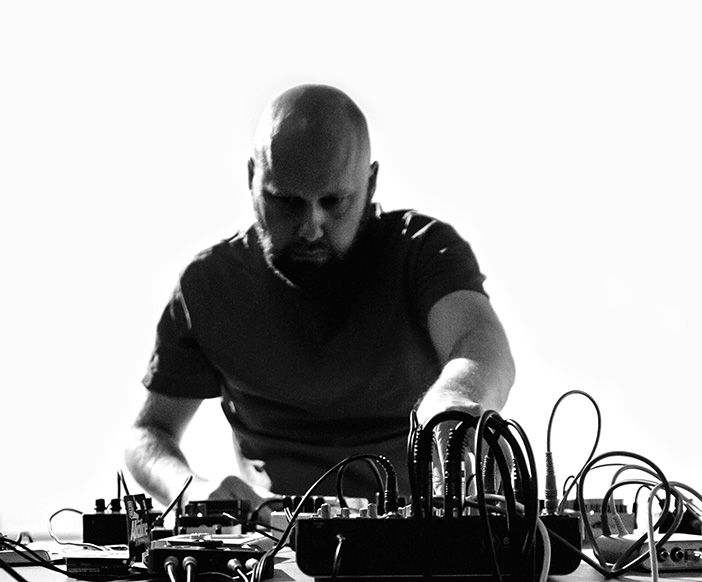 “Secret Thirteen Mix 028” is a penetrating one-hour studio recording which was accurately crafted and developed into the continuous brain stimulation soundtrack. A reliable example of how the constant sound can be versatile in the academic perspective.

The author of the mix is Lasse Marhaug (born 1974), Norwegian alternative scene musician who has almost become synonymous with so-called Scandinavian noise scene in the past years. Marhaug was born in the northern regions above the Arctic Circle of Norway but currently lives and works in Oslo. Marhaug works with different kinds of instrumentation; from guitar-pedals and homemade electronics to computers and modified guitars but conciders the mixing-board as the main instrument. Marhaug primarily works in the field of noise music but frequently drifts into the other terrains such as improvisation, jazz, rock and extreme metal. Marhaug has been involved in creating music for theatre, dance, art installations and video art as well. Active since the early 1990s. He has participated as a performer and composer in over 200 releases on CD, vinyl and cassette releases on labels such as Touch, Editions Mego, Kning Disk, Smalltown Supersound, Utech amongst the others. Marhaug also runs the label Pica Disk which releases respectful artists works such as Kevin Drumm, Oren Ambarchi and Will Guthrie.

“Secret Thirteen Mix 028” is an exclusive piece from Lasse Marhaug that can be described as assimilation between minimalism, noise and drone musical styles which deactivate the outside world around for advanced listener. The substructure of this recording stands on the especially intensively and thoughtfully arranged ambience that is frequently shifting in the matrix of hearing diapason. The fluttering static upper dissonance of atmospheres slightly masks the solid micro activity in the abyssal background which can be revealed only by the high quality headphones or soundsystem. This lethargic lengthy composition may require your concentration, patience and serious musical knowledge to comprehend all its balanced sonic musical declaration.