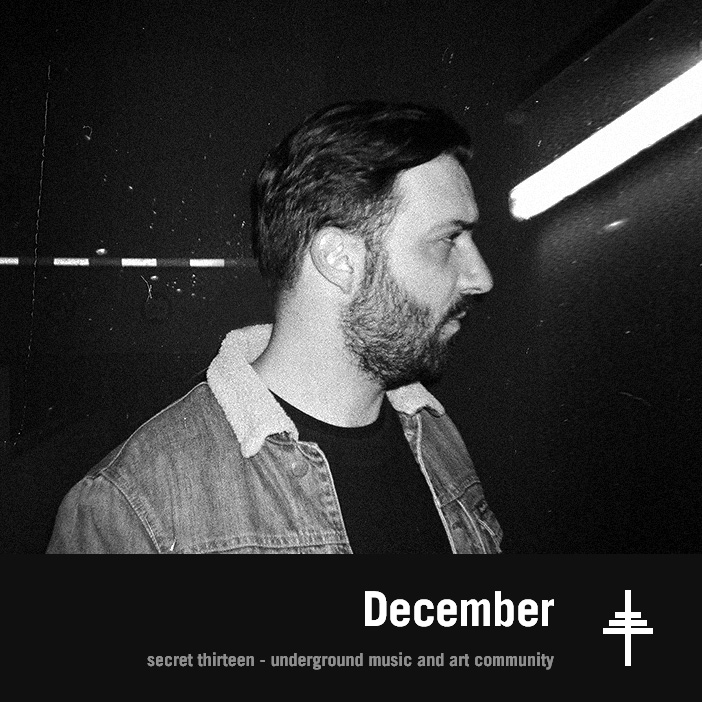 December is the alias of Parisian producer Tomas More, who is known for his decadent techno cuts. December introduces the more experimental side of Tomas and ventures into darker territories of EBM, ambient, as well as the grooves and waves of industrialized techno. As he himself puts it, the shift to December occured due to his need to explore deeper and crazier territories of sound. The debut release “In Advance of the Broken Arm”, which came out on Blackest Ever Black sublabel A14, was a stunning introduction - two tracks merging the territories of harsh concrete dub pulsations and electrified cold techno. Further on he crafted EBM bangers for “On A Leash” 12” released on Where to now?, and went into industrialized cinematic mazes on his split with Kaumwald (In Paradisum label). The latter release proves the fact that December is also informed by non-musical influences such as British noir author Derek Raymond or director Stephen Dwoskin, as shown in this mix. It is the second mix by Tomas recorded for a Lithuanian platform as he already gave an excellent mix for the Digital Tsunami series.

Secret Thirteen Mix 183 is a musical narrative standing on the boundary between shiny melancholia and intense drama. It consists of pieces from the last three decades connected into a coherent whole. The mix is inspired by Stephen Dwoskin’s movie “Behindert” and is one of the most emotional and heartfelt selections, a cinematic adventure or a sound drama, where subtle noises give way to bright ambience, and acoustic softness coexists with electrified lush soundscapes to act as representations of the film’s mood. The density of emotional layers is stunning, but at the same time the mix has this transparent and crystal clear feel and never hits the wrong note or loses consistency. The selection also has a circular element with Antoine Chessex’s “Silences part.3” and the concrete industrial of S. English’s “Supermoon” constantly interfering the layers of sound. Further on we face cohesively weaved diverse sonic mood swings including the blissful beauty of Gigi Masin, the harsh elegance of Cremation Lily, the floating cosmic haziness of Bremen, the haunted eerie pop of F ingers or the deconstructed toy sounds of Pascal Comelade. This beautiful whole encircles the listener into a strangely romantic narrative of love, anxiety and nostalgia. However, the main creative intention of the mix is best defined in Tomas’ own words:

“I'm quite obsessed by this Stephen Dwoskin film for more than two years now. I found it on a blog and the first time I watched it I was hypnotized. And by coincidence I saw another one of Dwoskin's films a few months after at an experimental films screening in Paris, so I've kind of discovered his work and got deeper into "Behindert".

"Behindert" can be read on two different levels. It is a film about love but also in the way it's been made, it is a film about the process of creation: Dwoskin “re-directs” his own life, the moment he met Carola Regnier. It apparently looks like a documentary - everything looks “real” - but it is a fiction. Dwoskin and Regnier play their lives. We can follow the different steps of their relationship: the dinner they met, love growing in their eyes, first moments as lovers, their complicity, the evolution of their relationship until the slow downfall of their feelings (especially hers) and the pain of breaking up. This whole story is directed and shown in a very subtle and implicit way. Not many words, simple shots - we experience the scenes through Stephen Dwoskin's eyes.

It's not randomly that I feel especially touched and connected to this film. I sometimes feel the same with my music, I'm often trying to re-create personal moments to feed my music with. I feel like I'm sometimes “playing” my life to make music, like Dwoskin and Regnier played their “roles” to make "Behindert". So i selected tracks that I thought were fitting the different steps of this incredibly strong film and played them while watching the film, live. I would like people to do the same, watch the film while they are listening to this mix - or the opposite.”