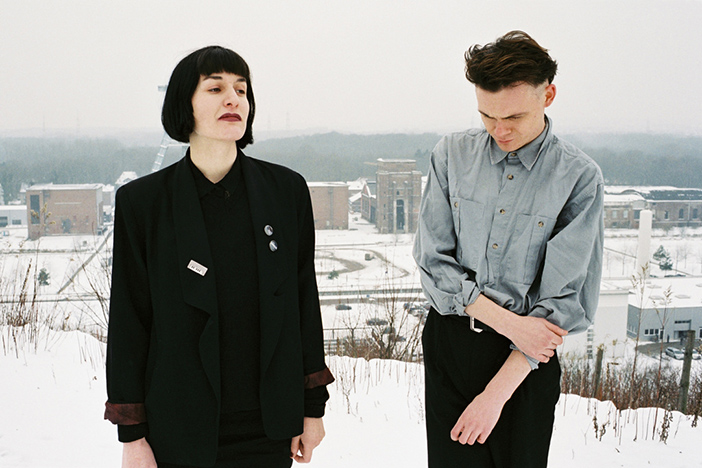 In search of real feeling - a heartfelt interview with Larissa Iceglass, one half of the modern age romantics Lebanon Hanover

Once there were two poetic souls wandering around Europe. Eventually they met each other and put their longing for love and true emotion into sound. Thus began Lebanon Hanover - an ice-cold reply to the alienating world coming from two warm hearts. The duo of Larissa Iceglass and William Maybelline seems to be one of true modern age romanticism - admiring William Wordsworth, fascinated by the beauty of art nouveau aesthetics, exploring British seashores and forests at night, and inspired by the urbanism of Berlin. They expressed these unique sensations in "Why Not Just Be Solo?" and "The World Is Getting Colder", released on Fabrika Records. Their sound shares many sensibilities with the fragility and elegance of French cold wave, the most subtle elements of goth rock, and minimal wave aesthetics. The perfect combination to express the poetry of detachment, longing, love and melancholy.

In this exclusive interview Larissa lets us take a glimpse at the very personal, but geographically vast world of Lebanon Hanover that stretches from Switzerland, Berlin and Ruhr Area Germany to the shores of Northern England and Scotland.

You are from quite different places - Berlin and England. How do those cities influence your art? How does this geographical dualism affect you?

We were both born in a place we didn't particularly like. I am from Switzerland, actually. The cultural difference is pretty big between the sterile Swiss and the rundown, rather primitive, Northern British lifestyle. It really shapes our music that we are constantly searching for a comfortable, exciting and creative place. Actually we still haven't really found a home. Berlin was inspiring but after three years - too humdrum and cold. Currently we are having a taste of the Ruhr Area in Germany and are pretty happy there.

Lebanon Hanover is a duo. However, we can see the difference in mood and style between songs performed by each of you. How do you each approach the project?

I think we are two very different musical elements. This was our great fascination with each other from the start and it was never difficult to work with each other. More like an instant chemistry. I adore William’s baselines, rhythms and structures, and he likes my chaotic, strange-sounding, haunting voice, lyrics and guitars. There is no concept or anything like that. All we wanted was to sound underproduced and nostalgic, because we were irritated by the digital and inorganic sounds we hear everyday. Since we are thinking very similarly, there is hardly any compromise - only criticism, which is good and helps the final product. Sometimes we work up to two months on a song, until we are both completely happy with it.

Your music is quite cold, introverted, it sounds like a response to an alienating world that lacks love and true emotion. How do you see the modern world? What kind of message, feeling do you try to convey?

Times are hard for romantics in this century. The world wants us to survive alone, do everything by ourselves and treat people like we don't need them. We find this terribly sad, for we have a very big longing for bonds and true friendships. I think people have become generally way too lazy to even reflect about the separation that is happening at the moment. The internet and smart phones have even made us more lazy and the real passions of life, art, nature, literature and love is just non existent. True love is something we really hope survives, but it can only survive when people become more individualistic and self-determined. It's the individuals that make society and I believe that every single one can make a change.

What role does Lebanon Hanover play in your life? Do you see it as self expression, necessity, pleasure, sublimation, entertainment etc.?

The moment of creating a song. I absolutely live for the moment you take the microphone, connect with your subconscious, sacrifice yourself to your inner melodies and put all of your heart into a track. Music is the most honest form of art for me, and therefore Lebanon Hanover is the very centre of both our lives. It's not just a side project or anything, it's our vocation and we could die for it. We do it merely for ourselves. To entertain was not the most important thing to do at the start, but I have to say that to be face to face with an audience and to fill the silence of the room with your own words and sounds is very touching and always an exciting experience.

Where do you get most of your aesthetic inspiration? Is it some place, a certain kind of music, other art forms?

Aesthetically we are drawn to romantic/art nouveau and the 20's and 80's period of the last century. Old framed black and white photos, movies, clothes. We love the well-mannered androgynous look - dressed in gloom.

I think it's important that our image reflects the depression of the 21st century that we all have to go through. Our favorite art form is literature. I am too sensitive for movies. Too many effects and sexual brutality scare me, so we mainly spend our spare time reading and imagining the words becoming pictures. Some name dropping of things we read at the moment: Oscar Wilde, Thomas Bernhard, Alice Schwarzer, William Wordsworth. Of course, music is always inspiring too, if a band has depth and honesty like for example Malaria, Kraftwerk, DAF, The Smiths. I can be very fond of them, but I don't listen to much music at the moment.

As far as we know you live in Sutherland in England? Why did you move there?

It's a tragic place actually. We mainly moved there to live for free at William’s parents', to be able to write music and explore the forests and the sea during the night. It was disheartening when we were completely isolated and shut of from the beautiful people we would have liked to be with. Only for the sake of our art we moved there. Though it was a very productive time and we were able to write music and lyrics every day, which counts in the end if it's all you live for. But I am very glad we finally escaped to Germany.

Your T-Shirt says "Lose Your Digital Life". Could you elaborate?

“Lose Your Digital Life” is a line from a new Lebanon Hanover song. It is an encouragement, a command from a hopeless nostalgic to bring people together in real life, but I too am unfortunately dependent on the internet and it is sadly impossible to lose it. The internet is a very informative and great tool to learn, but most people use it for distraction or cruelty. I am afraid of the future and not sure if it really connects humans, because after all we are not 'together' if everyone is in their own smartphone at a party. The critical minds, I guess, there is just not enough of them.