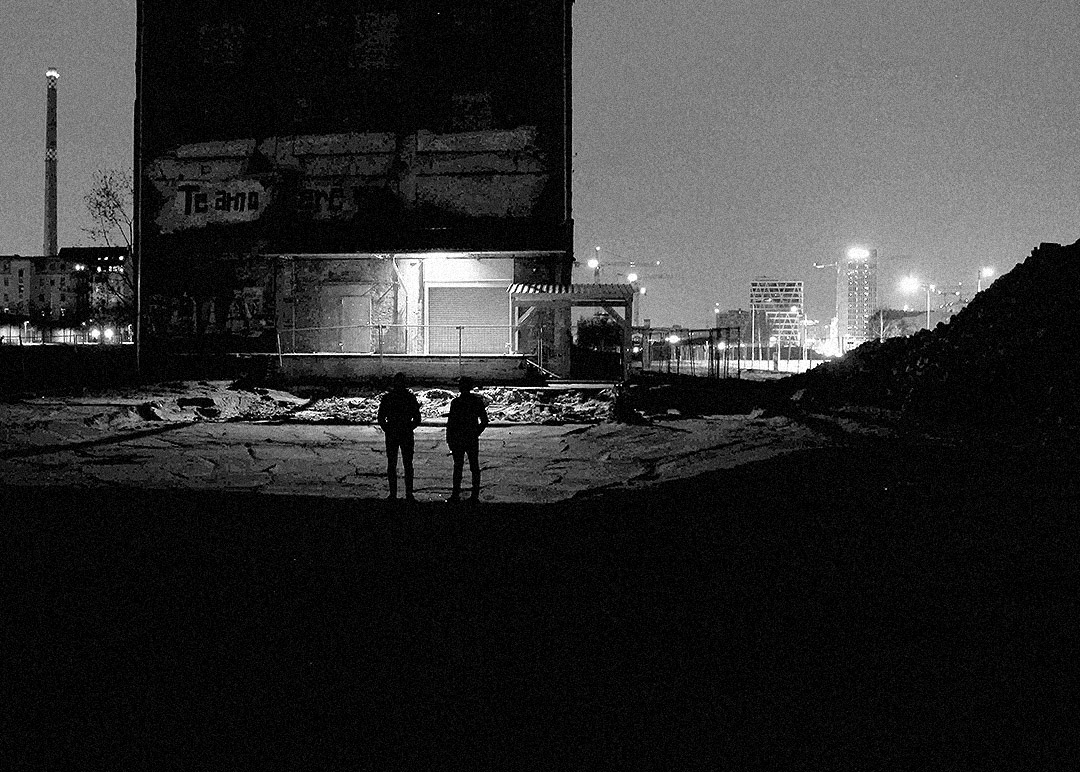 -N is a mysterious duo based in Berlin

-N is a mysterious duo affiliated with the Berlin-based interdisciplinary oqko collective. The identity of this pair remains undisclosed, and all we know is that they met and began their collaboration after finding shared interests during a car ride from Sofia to Berlin. -N use a variety of unorthodox creative methods and forms to develop this multidisciplinary project. They rely on microphones exposed to magnetic fields, analog signals, reprocessed noises and pulsations. The pair merges their diverse backgrounds in DSP design, analog machines and field recordings to create a stunning, electrified combination of noise, industrial and techno. Their latest release, Hysteresis, encompasses these elements. It comes in a package, which includes a tape, several artworks and is accompanied by a video. The name explicitly hints at the concept behind the work, which explores the relation between magnets in magnetic/ferromagnetic fields. The distorted and grainy sound resonates with the piercing, blurry noise patterns that are occasionally framed by toned down techno rhythms.

Secret Thirteen Mix 213 is a truly mammoth undertaking. This high-intensity collage contains almost 50 tracks that are variously merged, cut-up and placed to interfere with each other over its 58 minutes. -N also includes tracks of their own production, as well as material recorded specifically for the mix to connect its various parts. They duo use snippets of tracks by artists ranging from AFX to Iannis Xenakis to create their own work - most of these tracks are mutated beyond recognition and molded into an intense and rapidly rotating context. The distorted quality and rough-edged sonic textures remind -N’s attempts at reflecting the activities of magnetic fields within music. Stylistically, the patterns vary far and wide to include outbursts of noise, IDM or the intense industrial/jungle hybrid that closes the collage and serves as its climax moment - the release of sustained magnetic tension. It is not an easy listen and is laden with plenty of unexpected, adventurous and intense twists. As such it might be said to remind David Kakabadze’s “Constructive-Decorative Composition” made of glass, wood, metal and tempera. In a similar way to this artwork, the mix is composed of very different materials in an attempt to recreate their physicality in sonic form.

We find a common thread in frequency bandwidth; we push aside trying to develop a full on mix within the apparent groove or decade the pieces belong to. The idea of layers was implemented within certain edits that were made in order to get an interaction from each of the tracks. There’s also a lot of inserted material that we recorded all along the mixtape in order to change the overall balance of the output, so even if not explicitly listed, most of the mix contains our own elements. The use of certain tracks that express a very specific use of technology due to the impact it had within a generation was one of the criteria to meet in order to generate a dialogue. The adoption of the technological object is essential to the discourse on how we perceive our own dynamics within sound and other practices.