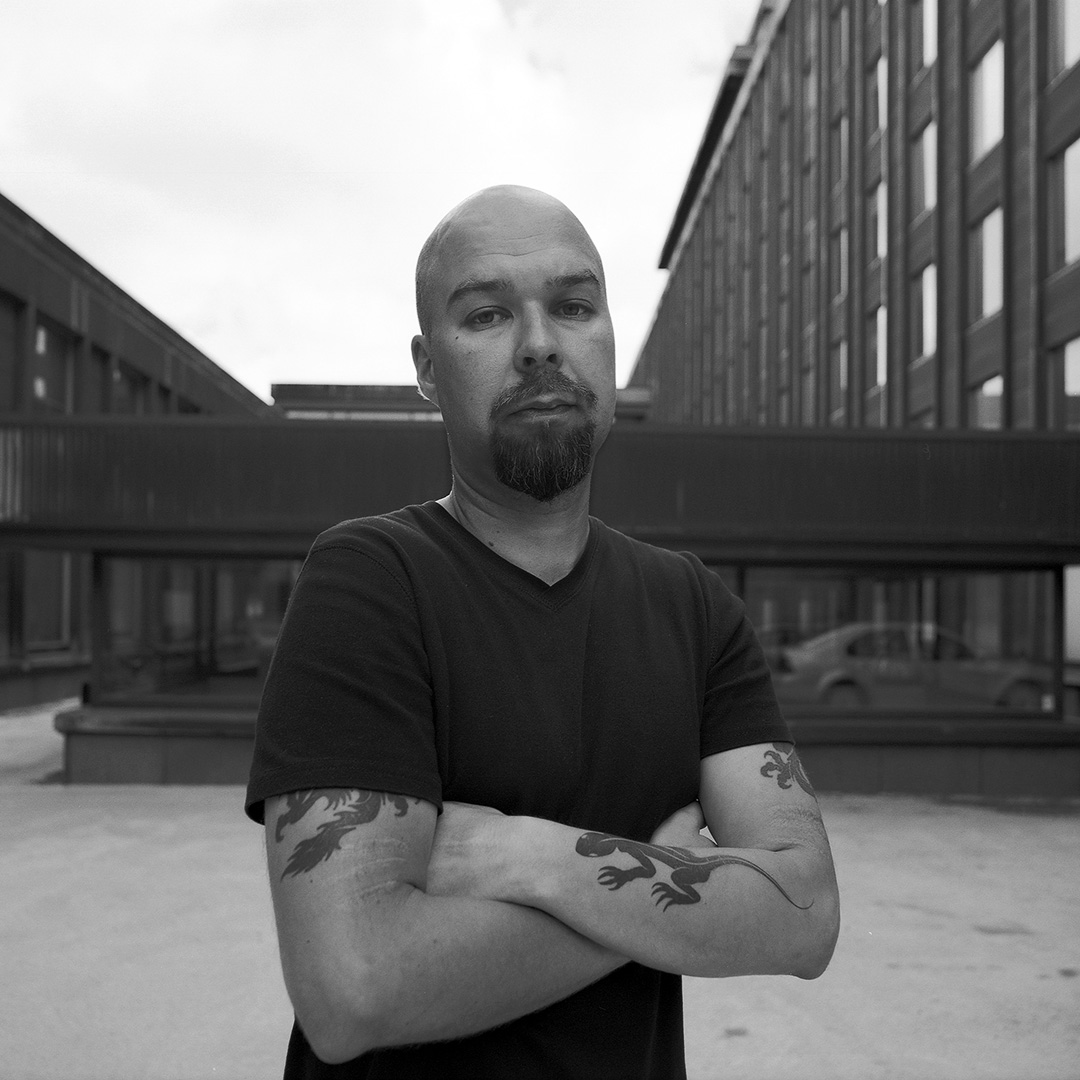 Mika Vainio talks about major influences, early industrial roots and the creative power of thunderstorms in this interview from Unsound Krakow.

In cooperation with Unsound festival we proudly present an exclusive short interview with Mika Vainio, also known as Ø, a member of Finnish experimental electronic music duo Pan Sonic (formerly Panasonic). Just before his live performance at Manngha Museum of Japanese Art and Technology in Krakow, Vainio recalled the beginning of his career, defined the change in audience, shared his personal opinion about contemporary life and his major influences.

We hoped to hear a lot more from the great Mika, including a mix for Secret Thirteen, which sadly never came to be. The man has passed away to the great detriment of music and art in general. On this unfortunate occasion we decided to bring to light our old and perhaps somewhat short interview. One mental image that sticks with us is Mika listening to Beethoven through a glorious autumn thunderstorm in Barcelona. Surely, there is a sublime tempest brewing on the other side tonight!

You have been involved in experimental/industrial scene since the early 80's. What are the key changes since those times when you started making music? Do you miss those pre-Pan Sonic times?

I don't really miss them. But there was some interesting things happening. From the year 1983 to 1985 I was a member of the industrial noise group called Gagarin Kombinaatti. We were using all kind of metal objects like shape metal, springs and tools, hammers and drills, also radios, tape loops, synthesizers and drum machines. I like that group a lot.

I have actually now all the cassettes, all the recordings we made in our rehearsals and I will start combining them and they will be released at some point. It's been quite funny to listen to those things.

What do you think about these recordings?

I'm surprised how much I liked them. They are very lo-fi, recorded with a small cassette player, but there are many tapes, over 20 cassettes, a lot of editing to do.

What space do you leave in your performances for improvisation?

When I play live there is always some improvisation, it depends on the project I am doing. When I'm playing solo there is maybe one third of it improvised. I have a clear structure, different pieces, but I can change the order of them or I can drop one out and choose another one instead. But there's always improvisation on top of them when I'm playing with those things.

And when you are performing with somebody else?

I'm in a group with Kevin Drumm, Axel Dörner, Lucio Capese and this is mainly improvisation when we play live. We have a loose structure, but then it's mainly improvised.

Talking about the audience, do you see any changes between how it was in the early 80's and now? Are they colder, more apathetic or enjoying your music? What do you feel while performing?

The scene was quite sad in Finland in the 80's, there was not much audience for the kind of music we were making. A very narrow-minded scene, the rock scene, even if they were supposed to be open-minded they were opposite of that, I think. Most of them, not all, of course. Things then started changing around the early 90's. I think it's a lot better now, the whole scene is a lot more versatile and open-minded. But there are quite big differences between countries where you play. It seems that the more you go north, the more restricted people come, the more you go south, they are more open with their feelings. I played many times in Athens, Greece and it was quite intense. But the last Pan Sonic concert was quite crazy. People were slam-dancing and stage-diving and our table broke at some point because they were climbing the table. That was quite fun.

My favorite places to play maybe are Buenos Aires in Argentina (been there 3 times) and Japan. Because in both places people are very attentive, they are listening, they are truly interested in the music. The most annoying situation is when there are people who just come to hang around and talk to each other, who don't care much about music.

Yesterday (12.10.2013) in Wroclaw it was very nice, people were totally quiet and listening. It's not very usual.

So what do you prefer – those quiet people or those partying people going crazy?

It's fun if they go crazy if it's connected to what you are doing, to music. But then if they are just not caring about music, just making a noise when there is a quiet moment in a set or whatever, then it's annoying.

What was the best sonic experience you’ve ever had?

There were some wonderful thunderstorms. Hard to choose... When I lived in Barcelona, in autumn there were massive thunderstorms. It was really nice. And you play some classical music like Beethoven really loud at the same time and watch all the thundering and lightning.

What are the differences between cities you’ve lived in? Do they influence your music?

Sure that they influence, but it's not so direct, it's not something I could point out, I think it's a bit simplistic to think like that. Because when I'm in Finland I make music which has wide spaces. I'm getting a lot of influences from many kinds of things, also a lot from the visual things. Movies are the big influence.

I get a lot of ideas from how things are edited, how some directors combine the fast moment to a slow moment, the mix of the visuals can be very inspiring. The classics, what I've been watching for the last 30 years, are Tarkovsky's movies and Kieslowski is great, I like David Lynch but not everything, but I like a lot anyway. Of the more new directors I like some films of Park Chan Wook from South Korea, Nicolas Winding Refn from Denmark is really good.

So you pay attention to editing and all the technical stuff in the movies.

Are there any public figures that impress you and inspire your works? Maybe somebody from the depths of history, their thoughts?

Yes, and their artworks. William Blake is one of them, also I like a lot of paintings by Rembrandt. Of the more modern I like paintings of Francis Bacon, they are the big influence. Joseph Beuys was great, and artists of the Fluxus movement, Yoko Ono has wonderful works.

Do you believe in destiny, fatalism, in God?

I cannot say I believe in it. Then it is a question of how we describe God. But not in a traditional sense, no. Sometimes I feel like there is no destiny, everything is up to chances. If you are crossing the street, but then the traffic light changes and the whole rest of your life changed. And then again, it's quite a scary idea. You don't know what's happening next, if you start thinking of that too much.

Sometimes I use environmental sounds and acoustic sounds. I make sound installations. One of them was constructed of sounds I made in Barcelona in which I recorded air ventilation systems of factories and warehouses. A couple of weeks ago I used to go out to record every night, because it's more quiet, not so much traffic. Then I edited a piece about it.

You just released a new album with Joachim Nordwall. Could you tell us more about this release. How did it come about?

I’ve known Joachim for a long time and we had an idea to do something together. We did not do much planning before we went to the studio. We had only one track – the first track ready before the idea of it, but everything else happened on that one day at the studio.

So it was also improvised?

Yes, it was quite improvised.

Maybe it is a provocative question, but what do you think about stupidity? Don't you think, that it is a wide spreading 21st century disease?

I think it's a disease of the whole history of humankind. Greed and stupidity. There is always this hand full of people, who are clever and they have the power to rule over others. Everyone is so stupid that they believe and follow them.

A lot of people watch stupid videos on Youtube and checking stupid blogs, it's getting more and more popular. It's so-called shitcore and it's spreading, why you think it's working that way?

It's easy and the same is true with music. Most of the people just don't bother to make an effort and to listen to anything. And what matters is the product, how it looks like, the image of the artist. Many people just don't care about the music.

Or maybe it's just because of the technology? Nowadays everyone can make music.

That's true also. But in general, I think it's just mainly that most of all the visual things and music is so bad and boring, because people are too lazy to make an effort, concentrate a little bit, do something a little deeper.

Do you have time to listen to music at home?

I listen to a lot of music. I've always been listening to all kinds of music. A lot of classical, certain kind of heavy metal, ethnical music, far East and Africa. I like Jamaican music from early 60's to mid 70's – ska, rocksteady and early reggae. Also I really like old blues, acoustic blues.

Radvilė Nakaitė is a journalist and editor of Secret Thirteen as well as a manager and producer of international cultural projects and events in Vilnius, Lithuania.