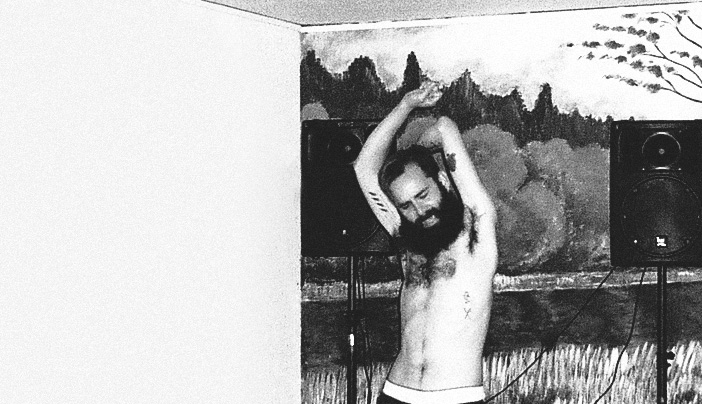 Peder Mannerfelt, also known as The Subliminal Kid, is a Stockholm-based Swedish sound sculptor and musician. He found a spare minute to answer a few questions about himself, creativity, the Swedish scene, life, and similar topics. Before reading this short, but honest interview, we invite you to play the powerful mix he recorded for Secret Thirteen a year ago.

Justinas Mikulskis: In July 2015 you will be performing at Outline Festival in Moscow. While most people are undoubtedly expecting a groundbreaking performance from you, what are your expectations for this event? Do you have any special goals set?

Peder Mannerfelt: My goal is to perform some bleeps n shit.

JM: Tell me a little bit about your background, something we don’t usually hear in interviews: Where did you grow up? Where did you go to school and how were your school years? What did you study?

PM: I grew up in a suburb north of Stockholm, spent most of my teenage years playing guitar in various hardcore/punk bands. When not playing guitar, skateboarding or drinking beer it happened from time to time that i went to school. Didn´t study anything special, just wanted it all to finish.

JM: What was the turning point in your life, where you have decided to fully delve into electronic music?

PM: After high school i did my national service in the Swedish Navy. This was ever more meaningless to me than school so i got really determined to learn how to make electronic music (at the time an alien concept to me coming from a more traditional guitar-based music making). I spent most of that year on a boat trying to hide from the officers, in my bed listening to Selected Ambient Works II.

JM: Tell me about the Swedish scene: did you have a mentor or iconic local figure you were idealizing? What local artist(s) impacted you the most both personally and artistically?

PM: I would say that Pär Grindvik has been (and still is!) a mentor and inspiration to me. We met about 10 years ago when he worked at a local record store, he has taught me everything about this bizniz. From helping me run my label to schooling me in Rotterdam gabber.

Now we have a daily dialog on just about everything, subjects ranging between hi-hat tuning and dirty diapers (we have kids the same age).

JM: Do you think that creativity involves putting your heart and soul into your work? Or is it more like letting your mind flow freely to witness the surprising results of your actions? What is the relationship between feeling and the mind in your works?

PM: I think you have to put in the famous 1,000 hours (or probably more) before you can start working on pure feeling. It has taken me up until a few years ago before i could feel totally disconnected from the technical side of my music making, and thus starting to have a more stream of consciousness approach to my composition.

JM: I do not know how much you are interested in the cosmos, but for me some of your works (for example “Lines Describing Circles”) invoke thoughts on cosmic phenomena. Do you try to implement influences from this field of science? Is there a particular scientific area you have an affinity for?

PM: No not really. I’m more into projecting a personal journey that strives to be as including and forward-looking as possible. It´s a kind of contradiction in itself but I like working in two different directions trying to push each to its extreme.

JM: Do you critique your own work? Explain.

PM: Yes and no. I throw away a lot of what i do, probably about 80%. I guess that´s a a kind of self critique, constantly reworking things and trying to push things forward.

JM: What does the word ‘destruction’ mean to you in relation to music? Is there a particular event that this word is associated with in your mind?

PM: The process of my music making does relate to destruction in some sense. I usually record long passages that i edit down and sculpt into shorter and more focused compositions. So it´s a matter of subtracting and i guess that could be seen as a form of destruction.

JM: Do you have any predictions on what future technologies could offer sound artists? Do you ever think about music created using telepathy or holographic musical devices? What are your ideas and visions on this topic?

JM: Artistically speaking, if you had the chance to live during a different time period, what period would you choose? Why?

PM: Tomorrow, so i can finish the track I’m currently working on.

JM: Is art in general a powerful influence for you? Do you have a favourite art movement or a specific artwork that could indirectly speak for your music? As a listener I would like to know more about your connection with art to better understand the sound you sculpt.

PM: It is, but so is everything else around me. I wouldn´t say a specific artist or movement in particular is what drives my work. At the moment I’m more influenced and driven by sociopolitical issues and the struggle for equality in every aspect of life.

PM: To include everybody regardless of ethnicity, class or sexual orientation. Everyone is equal and everyone’s voice matters. One love!