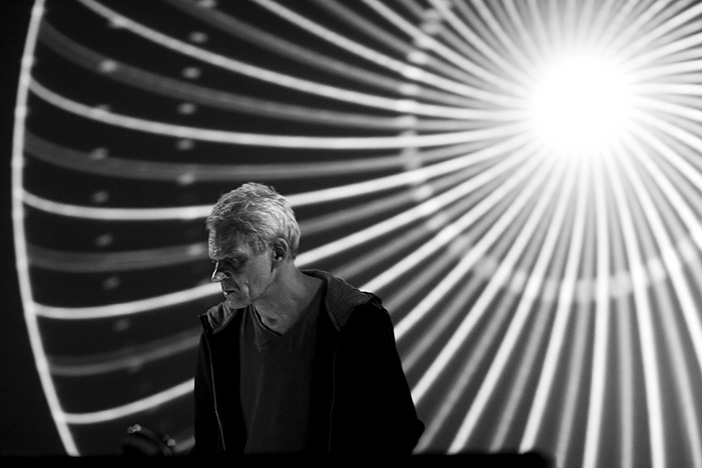 The author of the mix is Frank Bretschneider (b. 1956), also known as Komet, a German contemporary electronic music composer, musician and multimedia artist based in Berlin, Germany. Bretschneider studied fine arts and worked as a graphic designer until the early 80s when he began a prolific musical career. Influenced by early radio programmes about science fiction, films, astronomy, psychoacoustics, optics, art, architecture and literature Bretschneider passionately fell into the exploration of sounds. His first experiences in sculpting sine waves, working with tape machines, loops, modified guitars and synthesizers has led him to form an experimental music band AG Geige and to launch a cassette label klangFarBe for publishing their own production. It was a successful and influential start that was noticed in Eastern Germany. After The Fall of Berlin Wall and the split of the band Bretschneider continued producing and exploring computer based music. In 1996 together with Olaf Bender he founded a record label Rastermusic which finally merged with Carsten Nicolai‘s Noton to form Raster-Noton in 1999. In the last two decades Bretschneider has released over 20 critically acclaimed records on such prominent labels as Raster-Noton, Mille Plateaux, Richard Chartier's Line, 12k, Shitkatapult and others. He primarily works with sine waves and white noise as his source material. His oeuvre is dominated by complex tridimensional ambiance, micro sound patterns based on mathematics, inventive modulations and dynamic rhythmic structures and he is always trying to “encode the secrets of music”. Bretschneider is also experimenting with 8 and 16mm films and is interested in the interchange between visual art and music by various means such as film, video or computer graphics. He has performed at music and new media festivals such as Ars Electronica, Cut & Splice, Elektra, Mutek, Offf, Sonar, Steirischer Herbst, Transmediale and many others. As a solo artist he has cooperated with Taylor Deupree, Olafur Eliasson, Steve Roden, Ejnar Kanding and Ralph Steinbrüchel. Together with Olaf Bender and Carsten Nicolai he also runs Signal, another project of Raster-Noton.

“Secret Thirteen Mix 102” is an eclectic and mature audio selection which connects 20 original records released between 1956 and 2012. It is a completely influential mix without any concrete conceptual narrative. It was intuitively compiled and strictly developed to reflect Bretschneider’s favourite records of the last 20 years and some recent discoveries too. The fact that Bretschneider has always had a strong passion for black music makes us predict that this intimate mix hides different funky and dubbed production, as well as many other characteristic musical voyages too. By fusing unique catalogs that are disobedient to time and style, Frank Bretschneider gradually crafts a timeless selection that transmits versatility, matureness, flexibility, sensitiveness and meaningfulness. The basis of this mix stands on a vivid and mobile rhythms, melodic arrangement based on various old sample cuts and constantly shifting roomy ambiance. Contrasting records by such internationally acclaimed artists as Henk Badings, Can, Porter Ricks, Moritz Von Oswald, Scorn, David Torn and others simply capture listening attention from the very beginning, easily refresh the mind and fill the space with comfortability mood. These moving records weaved together not only enrich the whole mix with elaborate sound textures and kaleidoscopic production techniques, but also firmly expand its fundamental emotional and ideological foundation after expressive improvised collisions. Elliott Puckette’s delicately elegant, yet chaotic painting “Lacerta” clearly mirrors hidden complexity, stylistic scope and refined impression of Bretschneider’s mix. Selected music is chivalrous, emotionally powerful and liberal so it should find a straight way to every enthusiastic music lover’s heart.