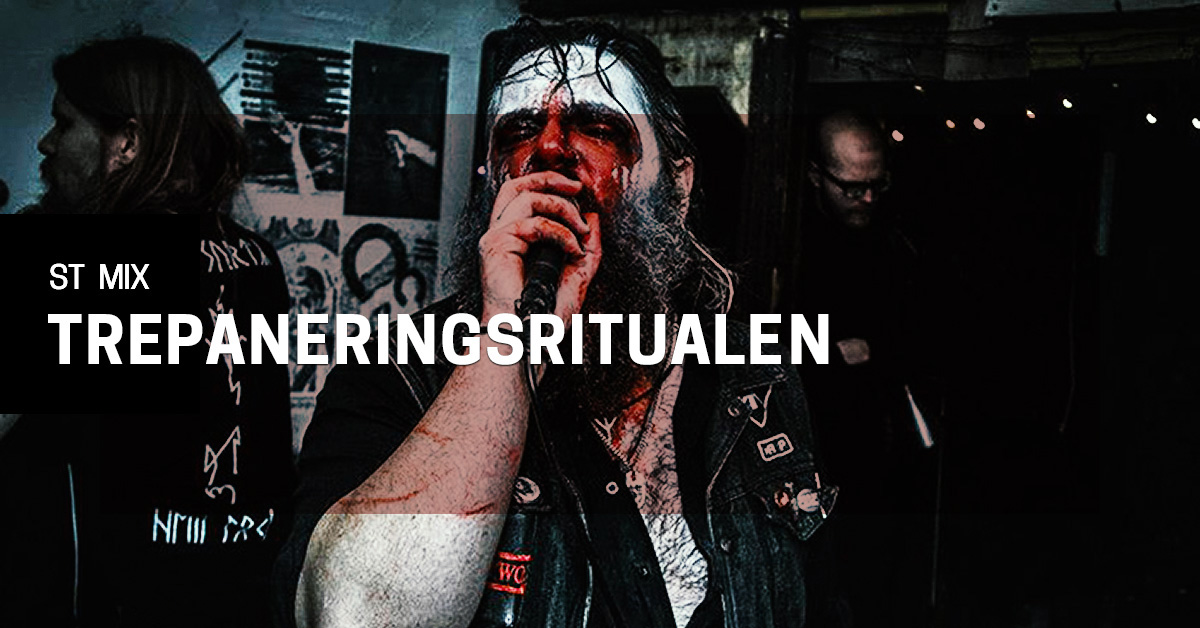 The author of the mix is Thomas Martin Ekelund (b. 1977), a Swedish industrial music artist and graphic designer based in Göteborg, Sweden. Throughout the past decade Ekelund was releasing music mainly under the name of Dead Letters Spell Out Dead Words, but since the project ended in late 2011, he started to focus more on other projects, such as Soma Sema and, most notably, his ritualistic solo project Trepaneringsritualen. Ekelund has released numerous records (cassettes, vinyls, CDr’s) on such conceptual labels as Release The Bats, Hanson, Small Doses, Fang Bomb, iDEAL, Malignant Records and others. Ekelund explores themes of religion, magick and the occult realms of consciousness. Weaving motives from the old school of ritual ambient & death industrial, Trepaneringsritualen creates rhythmic and at times seething musical formations with a characteristic creeping sense of desolation. Trepaneringsritualen conjures bleak but mesmerizing visions of the end-times. Influenced by such eccentric musicians/projects as Michael DeWitt, Current 93, Roger Karmanik, Anenzephalia and Psychic TV, Ekelund developed his own esoteric and harsh underworld of sounds that captivate and penetrate the psyche. It is also important to mention that Ekelund is running the Beläten imprint which releases a wide range of synthetic and acoustic music.

Secret Thirteen Mix 092 is a dark and dynamic audio selection of 15 transcendental records released between 1978 and 2013. The main stylistic trajectory of the mix is based on industrial music, but it also contains fragments of noise, neofolk, gothic rock and experimental. Timeless works by dark hearted musicians such as November Növelet, Death In June, S.P.K., Throbbing Gristle, Con-Dom, Pharmakon awaken the subconscious and emphasize the darker aspects of society. The basis of this mix stands on melodic agony gained from distorted and sharp electric guitars, forceful vocals, dramatic improvisations with various percussion instruments and occasionally emerging obscure rhythms. The vocals are noisy and suggestive, exploring themes of death, destruction, religion, nihilism, rebellion and the absurd. Even though the mixing is quick and rigid, Ekelund skillfully holds the tension of the mix through a flawless sequence of records. It is a timeless compilation consisting of records that made a strong impact on the growth of industrial and alternative music.

Secret Thirteen Mix 092 is like Pablo Picasso's macabre lithograph “Black Jug and Skull”, where use of the lithographic crayon and ink creates oppressive highlights and sharp definition. All angular rhythms, expressive edges and strongly contrasting areas of black and white can be associated with the suffering and death of the Second World War. The scene depicted in the lithograph is sombre and restrained and is quite similar to Ekelund's mix, which maintains a vanitas theme. Trepaneringsritualen’s mix is a memento mori, a reminder of the inevitable approach of death that shrouds the listener in empyreal wisdom.