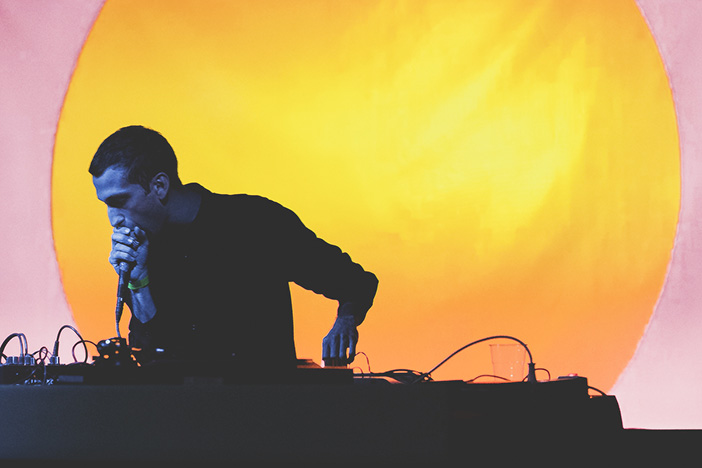 Alessio Natalizia is the producer and live electronic musician behind Not Waving, as well as one half of Walls together with Sam Willis. After some years of hard work, his effort started to bear fruit, allowing him to consolidate his name among the most inspiring acts on the European electronic scene. Last year’s outstanding “Intercepts” —in collaboration with Pye Corner Audio— or the recently released “Voices”, are two musical gems and a clear proof of this Italian’s personal style.

It is with good reason that this year he will be part of the sparkling Berlin Atonal line-up. For those attending, he will be performing Thursday evening on “Stage Null”. But before that, Alessio has granted us a few minutes of his time to answer our questions. Also, look for his new music coming out on Diagonal label.

Armando Valdés: Ciao, Alessio. Italy has a long electronic music tradition, but it is also the cradle of today’s artists, such as Roberto Crippa, Shapednoise, Violet Poison, Father Murphy, Heroin in Tahiti, Alessandro Cortini, Morkebla, and labels, such as Minimal Rome or Haunter Records. How do you see the role of the Italian artist in the context of Europe? Where does this tradition come from?

Not Waving: There is so much stuff going on in Italy right now that I struggle keeping up with it. On one side Italian big pop bands and guitar-oriented music in general are in a pretty uninspired place, but on the other end you can feel there is a revitalised energy, things have changed a lot in the last few years and Italy is now earning a reputation for its electronic music scene with new acts, a solid club scene, new labels and underground promoters. I don't like the idea of boxing people or places off. I believe in sharing ideas and cross pollination which is now made so fluid with the online world. That said, of course you are always strongly reacting to what you have around you socially and your own history. Italy has a pretty impressive tradition when it comes to electronic music. From Italo Disco to Cosmic, from Prog to Industrial, from Avant-garde to Pop weirdness, from Library music to movie soundtracks... so much gold!!! Hard for me to name names as there are so many I could forget. I've tried to document what I think is one of the most exciting periods in italian music's history in “Mutazione”, a compilation I made some time ago. Try to give it a listen if you can. It doesn't pretend to be a “Bible” but a starting point to start digging.

AV: What musicians and bands have been a big influence on you throughout your life? When did you start listening to electronic music and, of course, to compose it?

NW: I grew up listening to punk rock and hardcore. Coming from a small town in Italy, punk was not only a huge influence for me as a musician, but as a human being too. I got into electronic music later in my life. From punk rock I got into noise and post punk, from that I got into krautrock, and from krautrock I got into electronic music. I like to think that all the musical projects I have been involved in throughout my life are connected by the same kind of attitude, and the same direct, simple and honest approach to making and experiencing music. I really struggle with music and musicians who take themselves too seriously.

AV: "Voices" is a compilation of three works previously released in tape format, Voices I, II and III. Where did you find the inspiration to compose these works? They are very eclectic, could you explain to our readers how you recorded them, the compositional approach, and what gear you used?

NW: The initial inspiration came from Oliver Sacks and from reading about the conditioning studies made by B.F Skinner and Ivan Pavlov. I have always been fascinated by the relation between neurology, perception, attention, memory and comprehension. After reading 'Seeing Voices' I thought it would be interesting to imagine music as an excursion through the process of seeing noises and sounds. I know it basically sounds like a lot of bullshit but really it was just an excuse for me to write new music. I find it inspiring to have some kind of idea or concept in my mind when I approach new music, it helps setting limits for myself so I know what I can do and what I can't do. The overall idea for “Voices” was not to come up with fully formed songs but with sketches and moods. That was super inspiring because it would make the whole process very quick while, especially with the most recent stuff I have been working on for the new album, I usually tend to work on details of a track until I utterly hate it! I have used lots of synthesizers, drum machines and effects. As much as I absolutely love great analog gear I think people really focus on gear too much. I find talking about gear just plain masturbation most of the time.

Paulius Ilevicius: Your music has some scientific references, but at the same time it is very emotional and humane. What is the relation of your to human emotions and science? Are you more of a scientific or an emotional kind of person? How does it affect your music?

NW: I studied psychology and have always been interested in the relationship between science and human behaviours, between the empirical theories and the surreal and imaginative that comes with it. I guess I am emotionally scientific!

PI: Your sound has the sublime and futurist feel in it. Do you find the modern world/futurism romantic? Are you into retrofuturism/nostalgia?

I am not nostalgic and have never been a huge sci-fi follower. I like reality and aim for what I do to be relevant to the world it is made in.

AV: During the past three years you have been very prolific. Your collaboration with Pye Corner Audio was undoubtedly one of the best albums of 2014. How did you meet him? And how did you come up with the idea of releasing "Intercepts" together?

NW: A while back I emailed him saying I was a fan and if he would be interested in doing something for the label. We started talking and exchanging music and somewhere along the line the idea of a PCA/NW split came. Creatively it was such a natural process, much like having a shared language. If something works I don't tend to over-analyze, if it works it works.

AV: It seems "Intercepts" was inspired by the world of espionage during the Cold War. Do you see political content in music? Do you see it as a platform to express sociopolitical concerns?

NW: I see political content in everything. We were not trying to send any specific message. As I said before, giving concepts to a release is a way to gain focus, to set limitations. A way to project an image for the release, for both the musician and the listener.

AV: Atonal must be like "Mecca" for any electronic musician. How do you feel about being part of such a terrific line-up?

NW: I can't wait. Lots of great people are playing and I am really excited to check out their sets plus I am playing on stage with my friends so no doubt that will be a lot of fun. Also, I am looking forward to seeing the venue, I have never been but it looks incredible in the pictures.

AV: Ecstatic, the label you co-manage together with Sam Willis, has released some superb works both by Not Waving and Walls, but also other LPs and EPs such as "Ascention" by Primitive World, "M Is a Shape" by L/F/D/M or "Crippled Syntax" by Euclid. How do you choose your artists and bands? What do you look for when giving the opportunity to this or other artist? The line-up seems really eclectic.

NW: I don't want Ecstatic to be a label defined by one sound. That would be boring and uninspiring, so there are no solid rules when it comes to picking an artist to release. The aim is simple: release music we love, made by people we love.