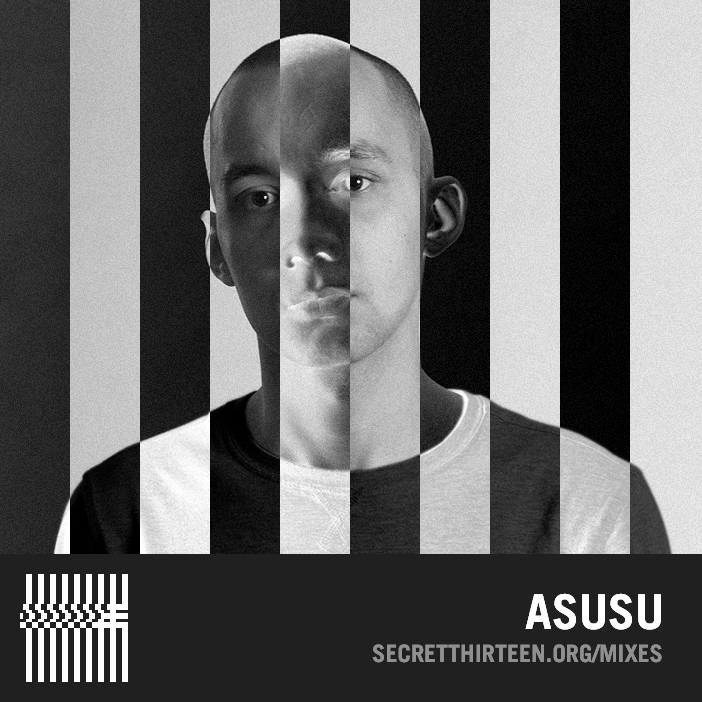 The author of the mix is Craig Stennett, a British electronic dance music producer, DJ, and sound designer. Stennett, who spent his childhood in the large spa town of Cheltenham, creates music under the name Asusu. This is a verb in the endangered Bodo language (mostly spoken in parts of North-Eastern India), roughly translated as “feeling unknown and uneasy in a new place” - a reflection of Stennett’s inner world during the time of his studies across the United Kingdom. During his student years in Bath he started visiting Bristol, where he first got into dubstep, and began DJing. Since his 2009 debut record “Small Hours / Taurean” on Project Squared, Stennett has released numerous dancefloor jewels on Immerse Records as well as the Livity Sound, an imprint he co-runs with Kowton and Peverelist. For a large portion of his career, Stennett was analyzing and combining fragments of UK garage, house, techno, jungle, and grime music to create his own post-dubstep works. However, he recently launched the Impasse record label with the brilliant “Serra EP” 12" - his newest record up-to-date, and one that clearly reflects his recent explorations of ambience and experiments with minimalistic grooves that go beyond his previous audio production.

Stennett is influenced by many types of music from oldskool hip-hop and house to classical, electroacoustic music. As he once told Truants magazine, “Anything can act as inspiration really, it just depends on how you interpret it”. He prefers creating music in the early morning and likes to step beyond his comfort zone to get better results. In this regard he seems a proponent of Les Brown’s wise words - “If you put yourself in a position where you have to stretch outside your comfort zone, then you are forced to expand your consciousness”.

Secret Thirteen Mix 156 is a cinematic selection of music that expressively, but leisurely floats in higher musical dimensions than most are capable of nowadays. 17 conceptually crafted and thoroughly developed masterful recordings from the last five decades create a continuous compositional soundtrack which took my mind on a smooth journey of metaphysical contemplation. I caught myself considering synthetic minds and holographic universes across lonely aeons. Subjective as that may seem, I believe this mix has a truly introspective quality to take the imagination on a ride.

The synthesis between suggestive field-recordings and subtle compositions where digital technologies reign truly feels harmonious here. Asusu transmits the overall sound as if in some kind of fictional space, letting us fully experience different, yet sometimes confusing and extraordinary moods which are difficult to find elsewhere. This is music that demands a high-quality sound system, fit to allow attentive listening and the sincere absorption of its supernatural radiation. Pieces from such influential composers and sound recordists as Jean-Claude Risset, Francis Dhomont, Michel Redolfi, Chris Watson, Darren Copeland and others contain such contrasting philosophical perspectives and unique composing principles that we just want to leave your brain to render the mix on its own.

S. H. Raza’s modern art painting “Bindu” could stand next to Asusu’s mix. Even the forms in the painting are abstract, it feels like they’ve been drawn through an expressionist artistic prism. Raza’s hypothetical landscape, however, floats from the depths of his mind and more broadly reveals his deeper authenticity. This is quite similar to what Asusu did with his mix - he disclosed for all of us his untold musical identity, and revealed it to be a lot broader and more forward-thinking than many could expect from his early works.

Raza perceived “Bindu” as the center of creation, an existence progressing towards forms and colour as well as energy, sound, space and time. He saw his painting as a source of energy that aids in concentration and understanding of the cosmos. By showing his inner experience and involvement with the mysteries of nature and form expressed in colour, lines, space and light, he broke free of any psychological boundaries humans experience in modern days. This is just how we perceive Asusu’s mix.

Craig Stennet on his recording

Computer music, musique concrète, and the various sub genres of electroacoustic music hold a special interest for me because of their emphasis on the intrinsic qualities of sound.

I have no formal training in music, and little understanding of notation. Even basic ideas relating to things like scales, melody and harmony elude me. Not that I couldn't learn more about these with a little effort, but what interests me is the nuance of sound; gesture rather than metered rhythm, and timbral qualities rather than melody.

For this mix I chose a few pieces that have inspired me over the past few years, particularly in my more recent works. This is the music that compelled me to make recent tracks such as Anglo Skin, Arrhythmia and Low Art, as well as influencing the general approach and processes behind the house and techno I make.