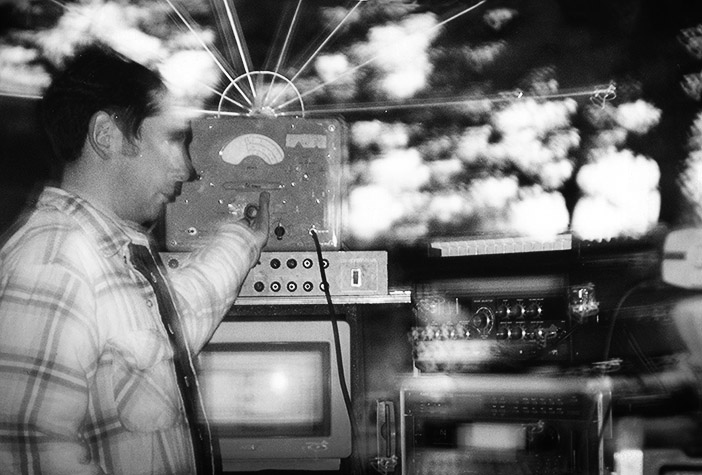 The author of the mix is Bobby Bird, widely recognizable because of his Higher Intelligence Agency project. HIA was formed in 1992, at the same time when he and some fellow electronic music enthusiasts started up a legendary experimental electronic music club Oscillate in Birmingham. In these early days at Oscillate, Bobby has brought along various bits of kit from his home studio and started experimenting with it in a live setting, mixing in live tracks among vinyl records. This was the beginning of Higher Intelligence Agency.

Soon after Beyond Records emerged. The first track ‘Ketamine Entity’ was released and appeared on the genre defining ‘Ambient Dub Volume One’ compilation album. This was followed by a single ‘Speedlearn‘, a track on the groundbreaking Warp compilation ‘Artificial Intelligence 11′, and a debut album “Colourform“ released on Beyond Records in 1993. Over the next couple of years Bobby Bird assisted by fellow Oscillate DJ Dave Wheels performed live as HIA throughout Europe and continued to help promoting & developing the burgeoning live electronic music scene as part of the Oscillate collective with performances by HIA and other cutting edge electronic artists of the day at the Oscillate club in Birmingham.

In 1995 a second album ‘Freefloater‘ was released and Bobby collaborated with Geir Jennsen of Biosphere to produce their live album ‘Polar Sequences’. Over the following years further collaborative albums were released: ‘Higher Intelligence Agency Meets Deep Space Network’ (Bird/Wheels/Moufang/Grossman, 1996), ‘S.H.A.D.O. 1 (1997) & S.H.A.D.O. 2 (1999) (Bobby Bird/Pete Namlook) on FAX Records, and in 1997 Bobby started his own label Headphone, releasing his second collaboration with Biosphere ‘Birmingham Frequencies’ (1998), and a collaborative album ’Nothing’ under the name System Error.

“Secret Thirteen Mix 121” is a hearty and relaxing mix consisting of 13 symbolic records created between 1967 and 2011. Thoughtfully compiled tracks are imperceptibly weaved together, forming inspiring, yet delicately nostalgic beautiful wholeness. Bobby is mixing mainly timeless electronic music pioneers’ tracks from the glorious HIA times. Many of them somehow were connected to HIA’s musical activities at that time. Biosphere, Uwe Schmidt’s production, The Black Dog, Deep Space Network are only a few brilliant examples of what awaits inside. This mix is not following any nowadays musical trends, rather it reflects the times when there were not so many stylistical classifications, everybody was doing their own ‘thing’ and was keen to help each other in the music industry. This crystal music connects everyone, old and young, it is like a universal language that connects even confronting souls. Enjoy this peaceful voyage by the true legend - The Higher Intelligence Agency.