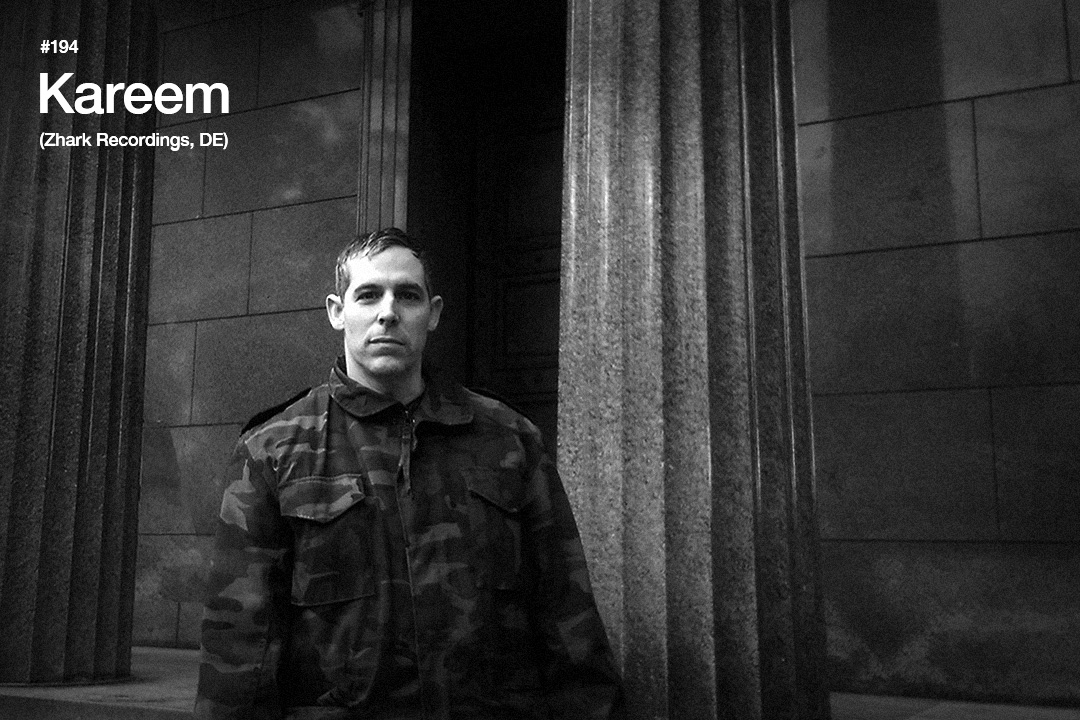 Patrick Stottrop is a name that may not sound familiar to many, but the same can’t be said about his artistic alias - Kareem. His popularity is not a matter of luck. The German producer, who is also the founder of Zhark Recordings Berlin, has been releasing some of the roughest and most visceral material throughout the latter 20 years. During this time, his one-of-a-kind versatility has shown a consistent, yet forward-looking approach, offering the perfect canvas to draw captivating landscapes with a trademark style, built upon eclecticity and lately focused on heavy industrial-techno beats and profound dronish distorted layers.

To find his first EP, we must look back in time, specifically to 1996. That year, he released “In The Bush” and “The Payback” together with Hecate. However, his first long play would still have to wait 6 years. Entitled “Full Spectrum Dominance” and released by K2 O Recordings, it helped to confirm the evidence: Kareem had shown up to sculpt some of the most fascinating sounds in modern electronic music. And he was here to stay. After that, “Battlefield”, “Noctromas”, “Mesmer” and “Porto Ronco” followed up. Also, among all the jewels he has polished throughout his prolific career, two collaborative EPs shine as bright as his solo adventures. In a true display of power by two heavyweights, 2012 saw Kareem step into the ring with Ancient Methods - “Exstinctio Conscientia” was the outstanding result. Later on, last June, he surprised us all with “Le 17 Janvier Los Angeles, USA”, this time co-authored with Huren. In this EP the German provides listeners not only with the usual harsh 4/4, but explores other territories as well, particularly an emotional drone ambient exercise titled “The Borromeos Arrival”.

Secret Thirteen Mix 194 will undoubtedly quench the thirst of industrial enthusiasts. Kareem has developed other roles besides those of producer and label owner. In fact, his skills behind the decks have made him famous too. But all three facets have something in common: an extreme rhythmic energy and an incredibly heavy experience. This mix is a good example. This 90 minute session of music combines an impressive list of proficiently mixed tracks, some created (or remixed) by Kareem and some by the most prominent names in new and not-so-new industrial, techno and other aggressive genres. Just as his own career, the first steps of the mix walk through various styles, starting with a sublime ambient exploration by Nathan Siter entitled “Silver Web Hue”, the elliptic structure of Shadow Huntaz’s “Deander”, the sharp corrosion of Shapednoise’s “Enlightment” featuring Justin K. Broadrick, or the brutal breakcore of Christoph de Babalon’s “My Confession”. After that, intensity keeps growing as techno and industrial sounds come into the picture. The names speak for themselves: Blush Response, D’Arcangelo, Huren, Imminent Starvation, Speedy J, Vatican Shadow, Monica Hits The Ground and Casual Violence. On his part, Kareem shares his unreleased killer remix of Stave’s “Minus” and adds a couple other jaw-dropping pieces namely, “Botas” and “Unlocal”.

All in all, this mix is a party gem, an intense trip consisting of 20 thoroughly chosen tracks and a myriad of frantic genres, with a special focus on industrial techno. Just as his live performances and DJ sets, it throws a good deal of muscle and hate and offers a ruthless way to shake the ground beneath our feet… literally.