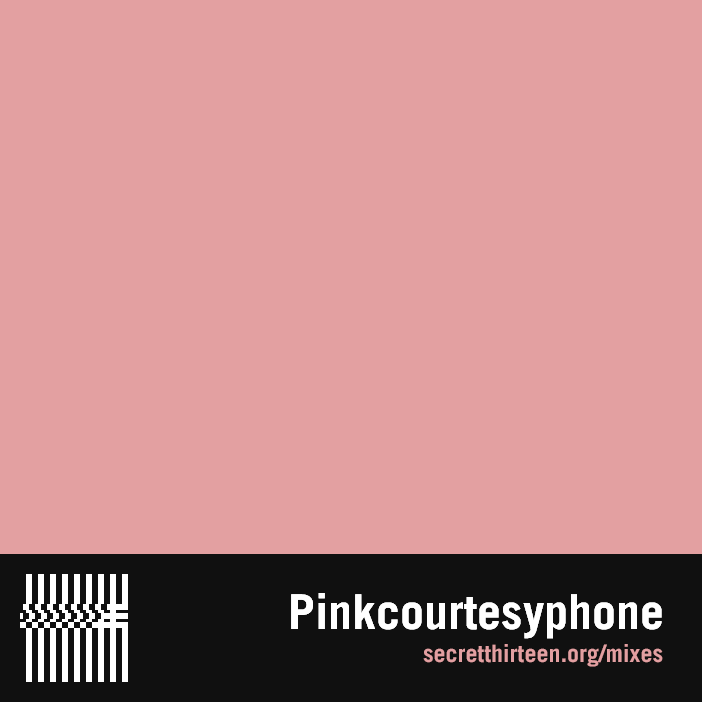 The author of the mix is Richard Chartier (b. 1971), an American musician, sound artist and designer, also founder of the respectable LINE records. After his first remarkable mix for Secret Thirteen, Chartier returns with his alter ego project named Pinkcourtesyphone. Over the last two years this project has released 3 albums on labels such as Room40, Boomkat Editions and his own LINE imprint. Chartier’s minimalist digital work explores inter-relationships between the spatial nature of sound, silence, focus, perception and the act of listening itself. After releasing more than 30 solo records in over a decade under his own name and collaborating with well known musicians such as William Basinski, Asmus Tietchens, Taylor Deupree and CoH, Chartier gradually builded a solid reputation as an accurate and conceptual artist. His visual and sound installations were exhibited across the globe including ICC (Tokyo, Japan), Castello di Rivoli (Torino, Italy), the Art Institute of Chicago, The Contemporary Museum (Baltimore, US). An interesting fact is that Chartier began DJing in 1991, in the heyday of techno, so he is carrying a vast baggage of musical and technical knowledge.

“Secret Thirteen Mix 085” is a smoothly shifting and very specific mix that highlights eclecticism, modernism and minimalism. Chartier constructed an extremely deliberate and colossal masterwork by connecting 35 diverse and complex records released between 1958 and 2013. Taking tracks from this tangled period of time, Chartier manages to reduce the tension between compositions and develop a crystal contemporary wholeness. Pretty layered and dense background of this mix and sometimes even eccentric, but very accurate mixing create versatility, richness and fascination mood that clearly maintains listener's concentration all the time. Feels like Chartier intuitively knows when and how to draw one's attention through incorporating diverse sound shapes forming absolutely new characteristic textures of known pieces. Dreamy melodies, scenic atmospheres and fluid rhythms frequently merge into each other thus building a mobile and picturesque musical installation. From the stylistic perspective Chartier merges music ranging from experimental, ambient, abstract to lo-fi, techno and industrial, but always leaves a space for unpredictability. Expressive timeless works by dexterous artists such as Tod Dockstader, Conrad Schnitzler, CoH, Coil, Pita, Rainforest Spiritual Enslavement and many other talents will cheer every die-hard music lover ears. Slightly weaved 4 exclusive records by Pinkcourtesyphone itself should completely excite the curiosity and encourage to listen to this high-quality selection.

“Secret Thirteen Mix 085” is like a delicate and monumental abstract painting "Am 7 (26)" by the well-known Bauhaus artist László Moholy-Nagy. Under its captivating and profound surface, this work holds a strong sense of early Constructivism movement statements and subtle obscurity that undoubtedly awakens each its viewer's imagination. Moholy-Nagy's emphasis on coloured and mathematical forms creates a similar reflection to Pinkcourtesyphone's bizarre selection. So once again Chartier proves his constantly growing musical sophistication, scrupulousness, accountability attitude to his occupation and ultimate experience in finding rare records. Prepare for the influential journey through mesmeric sound architecture and kaleidoscopic soundscapes.